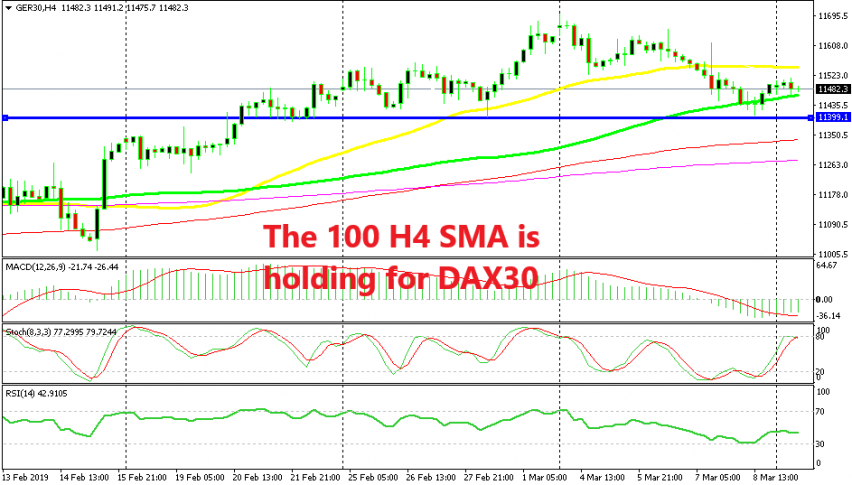 Although, stochastic is overbought now

Stock markets had a bad week last week. The market sentiment turned negative as three major central banks shifted from neutral/hawkish to dovish and as a result, risk assets such as stock markets and commodity Dollars had a bearish week.

German DAX broke below the 50 SMA (yellow) on the H4 chart which had been providing support before. The sellers pushed below the 100 SMA (green) too. Although, the price formed two doji candlesticks which are reversing signals and moved back above the 100 SMA on Friday, forming two bullish H4 candlesticks in the US session.

So the last session of last week ended bullish and if you switch to the daily time-frame, you can see that the price formed a doji on the daily chart as well. Today started bullish too with buyers pushing above the 12,500 level, but in the last few hours the sellers have come back and pushed the price lower.

But, the 100 SMA provided support once again in the last two hours. The 100 SMA held which suggests that the bullish trend will resume. But, the stochastic indicator is overbought right now on the H4 time-frame which points down.

So, it is going to be a battle between buyers and sellers for a while until one side wins and pushes the price in its direction. We hope that it is the buyers who will win since we are long on Dax from lower since Friday.