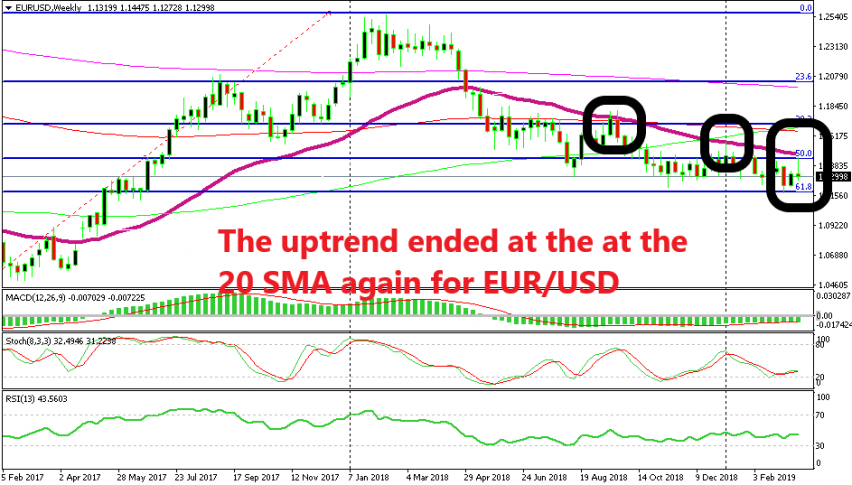 Weekly 20 SMA is Setting the Downtrend for EUR/USD

I have seen the weekly chart in EUR/USD recently but I have missed a pattern which looks quite important for long term traders. This forex pair turned dovish about a year ago after trading on a bullish trend during 2017. That downtrend slowed down during the last few months of last year, but seems like there was something in the making.

The price broke all the moving averages pretty easily on the way out last year and the decline only stopped at the 61.8% Fibonacci retracing level which connects the low from January 2017 and the high in spring last year. The decline stopped right above that retracing level.

Although, it was waiting for the first moving average to catch up and push he price lower. The 20 SMA (violet) turned into resistance immediately after getting broken in May last year and then it ended the pullback in September, reversing the price lower. So, the sellers were waiting for this moving average to catch up and give EUR/USD a push lower.

The 20 SMA caught up in the first week of January this week and reversed the price after the pullback. In the last two weeks we have seen another uptrend in this pair on the smaller time-frames after bouncing at the 61.8% Fibo level again. But the pullback ended right at the 50 SMA once again. It coincided with the 50% Fibo level which strengthened the resistance.

EUR/USD eventually turned lower in the last two days of last week and the weekly candlestick closed as an upside-down pin, which is another bearish signal. So, the long term picture for the Euro looks pretty bearish technically as well as fundamentally.