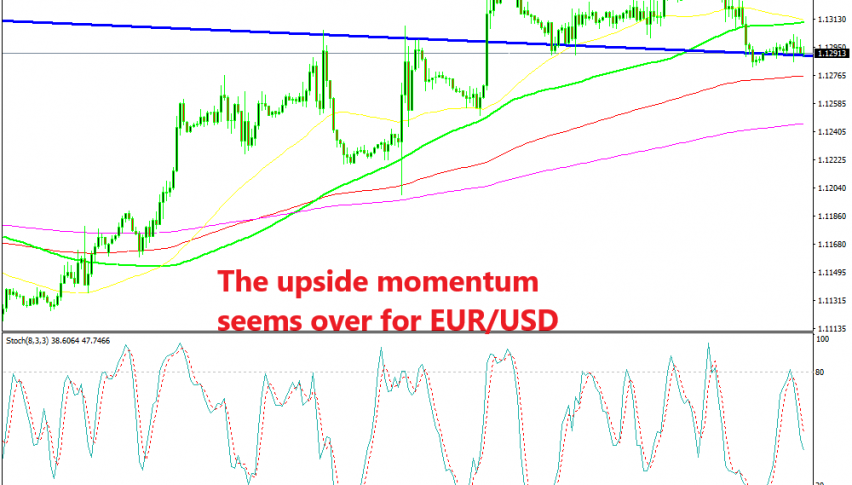 EUR/USD seems to be turning down now

Yesterday I opened a sell signal in EUR/USD. This pair has been climbing higher for more than a week and it reached 1.1340s this week, but it started having trouble in the last few days. The buyers couldn’t make any new highs and the inflation report from the US yesterday was pretty upbeat, compared to the soft economic data we have seen from the US recently.

Headline CPI (consumer price index) inflation moved lower to 1.9% but core CPI remained unchanged at 2.1% which is a really decent level. On the other hand, average weekly and hourly earnings ticked higher, which is a positive sign for inflation and consumption, such as retail sales in the coming months.

The USD turned bullish yesterday after that and our signal missed the take profit target by only a couple of pips. Although, this pair found support at the descending trend line connecting previous highs and tried to turn bullish again today, moving above 1.13 by a few pips, but the bullish move was quite weak and now the sellers have returned again.

Just a while ago we had the industrial production report being released for the Eurozone. Industrial production has declined in the last four out of five readings and the number for March was revised lower to -0.4% from -0.3% previously. Today’s report was expected to show a 0.4% decline again, but it came at -0.5%, which means that the economic situation is still deteriorating in Europe. So, there is no reason for the Euro to climb higher and it has now turned lower again. We’re just waiting for the price to hit the profit target of our open signal in this pair now.