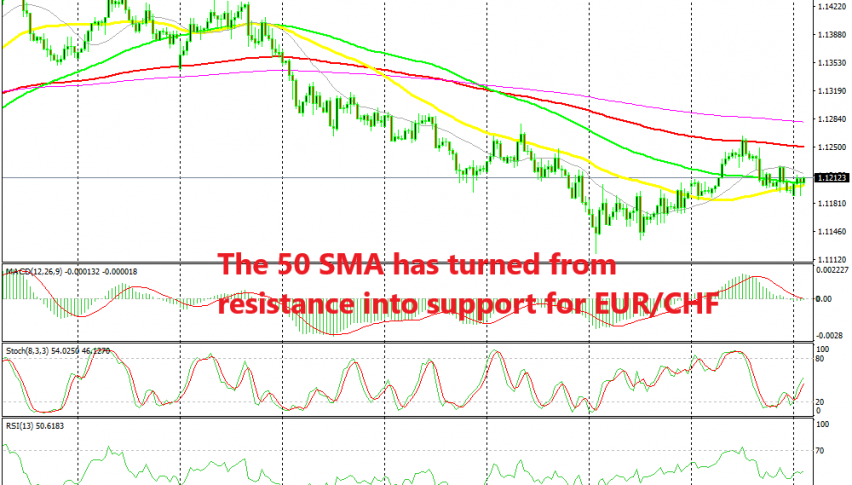 EUR/CHF turned bullish at the beginning of this month, following a strong bearish trend during May. The market sentiment deteriorated after the trade war between the US and China escalated again which increases bids for safe havens such as the Swiss Franc. But in the last couple of weeks, GOLD has attracted all safe haven bids and, as a result, the decline in USD/JPY has stopped and EUR/CHF has reversed higher.

The Swiss National Bank helped the buyers as well when they threatened with intervention if the CHF became too strong against the Euro. EUR/CHF climbed around 140 pips higher in the last two weeks, but it ran into the 100 SMA (red) on the H4 time-frame, which provided solid resistance at the middle of last week and it retraced lower.

Now we can say that this was a retrace, but that wasn’t a certain thing until today. The climb higher could have been a retrace of the larger bearish trend and the reversal down since the middle of last week could be EUR/CHF resuming the downtrend. But today, the picture looks still bullish after the 50 SMA (yellow) held its ground for a few days.

The sellers had a last try this morning, briefly piercing the 50 SMA but the buyers pushed back up and the previous candlestick closed as hammer, which is a bullish reversing signal after the retrace lower. Now it seems like the bullish reversal will come and the uptrend will resume soon.