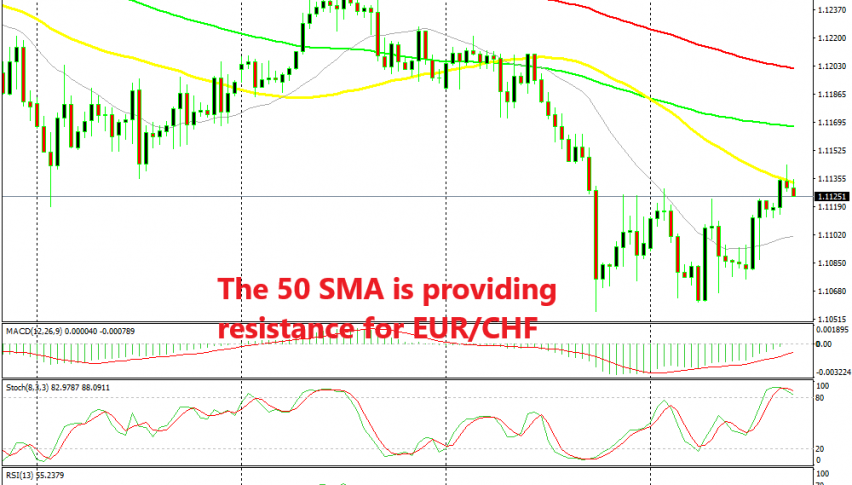 The pullback is complete n the H4 chart

In the last few weeks, we have been buying safe haven assets such as the JPY, the CHF and GOLD. The sentiment has turned negative in financial markets due to the reasons we have mentioned many times recently such as geopolitical tensions, the escalating trade war and the slowdown in the global economy, which has increased the demand for safe havens.

So, trades such as short USD/JPY and EUR/CHF have been easy, as these pairs have lost several hundred pips in the last two months and we have made quite a few pips off them. Although, yesterday we got caught on the wrong side in USD/JPY as this pair climbed more than 100 pips higher after the US trade Secretary Mnuchin said that a deal with China is 90% done.

The sentiment improved in financial markets and safe havens retreated, hence the pullback in EUR/CHF. Although, the 10% that remains is what matters since it includes IP theft, currency manipulation, opening of the Chinese market market to foreign firms without forcing them to transfer technology to Chinese firms, etc. So, it’s not over, and that’s why there’s still caution in financial markets.

EUR/CHF retraced nearly 90 pips higher as a result of improving sentiment and it reached the 50 SMA (yellow) on the H4 chart today. Now the retrace higher is complete as stochastic is overbought and the 50 SMA is providing resistance. Besides that, the previous candlestick closed as an upside-down hammer which is a reversing signal, so we decided to go short on this pair again just now.