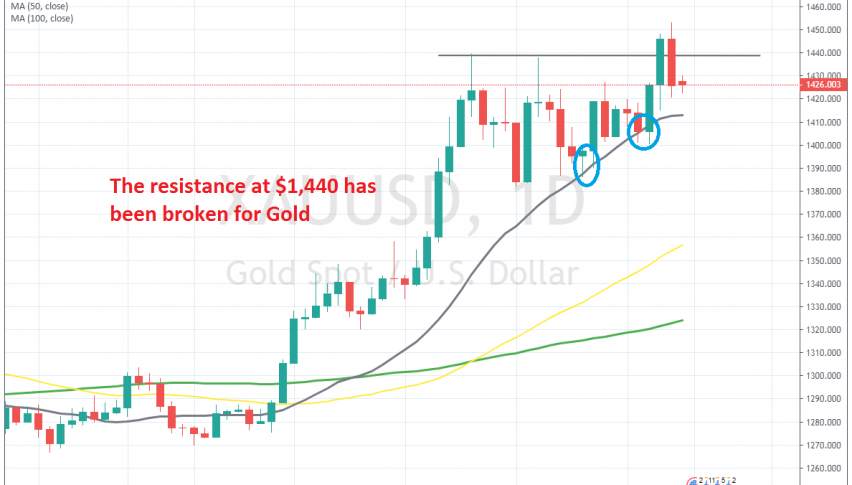 Gold Stretches the Uptrend as it Breaks the Previous Resistance

The 20 SMA is catching up with the price again

GOLD has turned really bullish in the last two months. It surged from below $1,300 at the beginning of June to $1,440 by the end of the month, as the sentiment in financial markets deteriorated, helping safe havens such as Gold. The price retraced lower in the last week of June ahead of the G20 summit but the buyers were quick to jump back in the game and push the price higher.

But they failed to take out the previous high at $1,440 again, so the zone surrounding that level turned into a resistance for Gold. Although, the lows were getting higher for Gold, especially after the 20 SMA (grey) caught up with the price on the daily chart.

This moving average pushed Gold higher in the last two weeks and on Thursday last week, the buyers finally broke above the resistance level at $1,440. The price reached $1,453 on Friday, but has been retracing lower in the last several sessions. Now it is heading towards the 20 SMA again where I plan to buy.

But, I will watch the price action to see how it reacts down there and if a reversing signal forms. If the price action points to a bullish reversal, then we will pull the trigger, but first we have to wait for the 20 SMA to catch up again.