The economic bulletin from the ECB points to QE soon

In recent days we have seen some big moves in financial markets. Crude Oil has dipped lower and US WTI crude is now heading for the $50 level after breaking below $52 today. GOLD has climbed more than $100 since last Thursday when Donald Trump announced new tariffs on China which hurt the sentiment in financial markets and sent safe havens surging. Risk currencies such as commodity have been declining pretty fast, which picked up pace yesterday after the Reserve Bank of New Zealand cut interest rates by 50 bps.

Although, today markets have been pretty quiet as the economic calendar has been pretty light and we haven’t heard any explicit comments from politicians or central bankers which could induce volatility in markets. The European Central Bank released its monthly economic bulletin which is the first after last week’s meeting but it didn’t offer much as the comments there were pretty similar to what we heard in the press conference. Although, seeing that the ECB is now thinking seriously about starting another QE (quantitative easing) programme, the Euro will turn really bearish at some points, which will likely come when the ECB announces the new stimulus package. 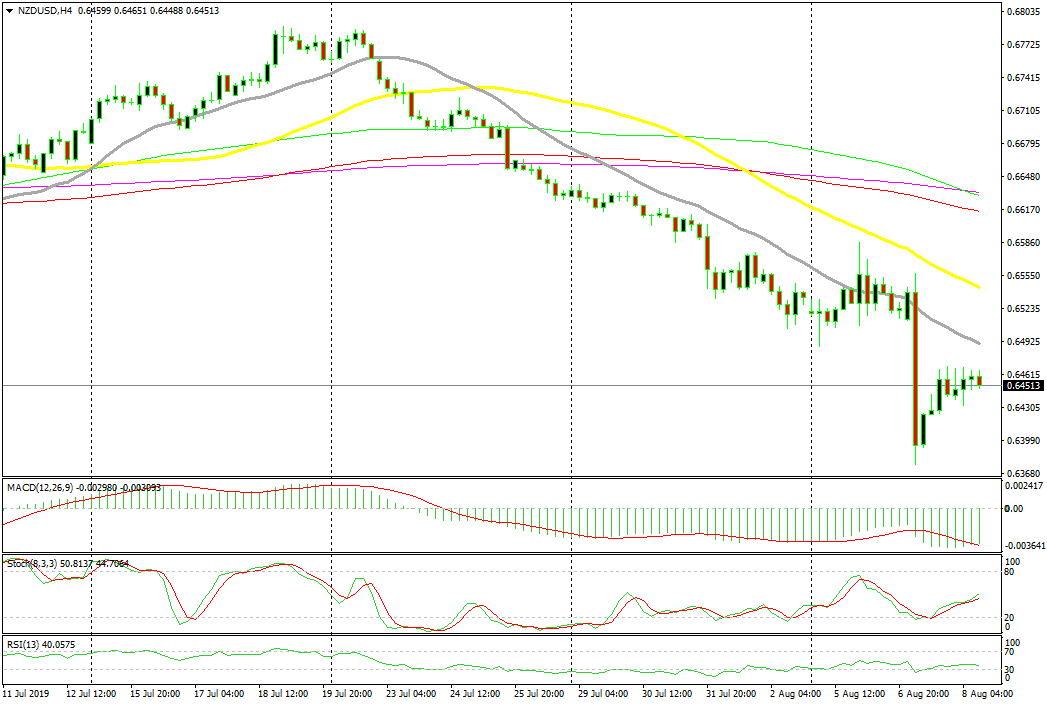 The downtrend will likely resume once the 20 SMA catches up

NZD/USD turned really bearish about three weeks ago together with the Aussie as the sentiment deteriorated in financial markets. This pair has lost more than 400 pips during this time and the downtrend picked further pace yesterday after the RBNZ cut interest rates by 0.50%. The RBNZ left the door open for more easing in the coming months, so fundamentals are pretty bearish for the Kiwi, as the trade war escalates further. This pair has retraced higher but the retrace seems almost complete now on the H4 chart. Buyers are not making new highs and the recent candlesticks point to a bearish reversal. We went short on this pair but the reversal will likely come when the 20 SMA (grey) catches up with the price.

Markets continue to remain quiet with Gold slipping below $1,500 slowly. Although, EUR/USD has lost around 35 pips in the last couple of hours, probably due to the ECB economic bulletin. but as I mentioned above, the big decline will commence once the ECB announces a date for the start of the next stimulus package.