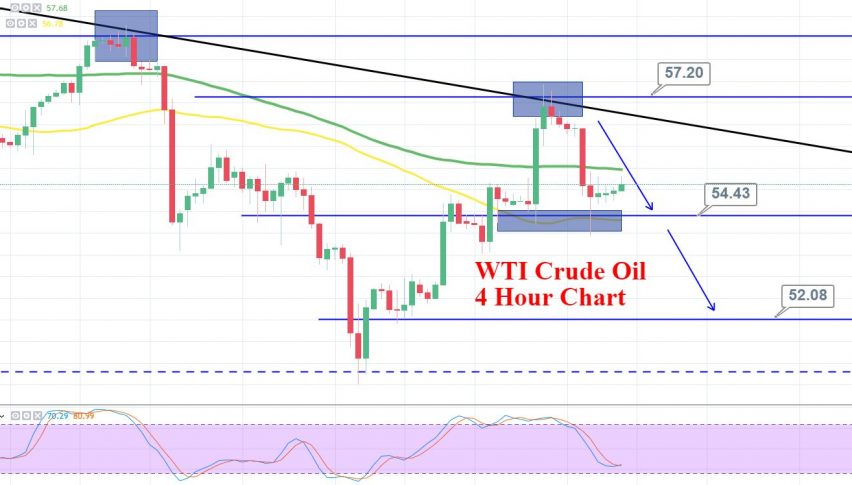 On Thursday, crude oil prices steadied after sharp overnight losses as US crude stockpile data reported an unexpected surge in inventories. Perhaps, it’s due to mounting fears of recession and economic data out of China and Europe which disappointed investors lately.

The series of economic data suggesting a slowdown in global growth amid the US-China trade war is hurting the recent optimism in crude markets. However, the falling demand and oil prices have stoked expectations that leading producers, OPEC and OPEC+, may take further steps to support prices.

Lately, the Energy Information Administration reported a surge in crude oil inventories by 1.6 million barrels last week, compared with analyst forecast for a drop of 2.8 million barrels, as refineries cut output. At 440.5 million barrels, the stockpile was about 3% over the five-year average for this time of year, the EIA said.

A build of inventories is due to the US-China trade war and drop in China’s industrial production figures which have increased the chances of a recession in the economy.

On the technical front, crude oil continues to gain support around 54.40 support, extended by the double bottom pattern on the 4-hour chart.

Lately, crude oil has closed a hammer candle right after a solid bearish candle, which is suggesting odds of bullish reversal in crude oil.

In addition to this, the 50 periods EMA is also extending support at 54.40. However, the leading indicator like RSI and Stochastics are holding below 50, suggesting a bearish bias.

Traders, I will be looking to stay bullish above 54.40 with a stop loss below 54 and take profit of around 56. On the flip side, selling is suggested below 54 with a target of around 53.50.