The sentiment in financial markets has been switching on and off during this year, and it continues to do that. In the last few days, the sentiment has been positive, with the USD climbing higher, while safe havens have been retreating lower. But, the US ISM manufacturing PMI report yesterday turned the sentiment around once again. Expectations were that this indicator would climb above 50 points again yesterday, meaning that the manufacturing sector would turn into expansion again after a small contraction in August.

Instead, the ISM manufacturing PMI indicator declined further to 47.8 points, which means deeper contraction for manufacturing. This sector is in great difficulty across the globe. In Germany and in the Eurozone, manufacturing has been in recession throughout this year and things are getting worse. Now, fears that US manufacturing might join in recession have increased and the risk sentiment has been switched off again. Stock markets and the USD have turned bearish now, while safe havens have been surging, especially Gold. 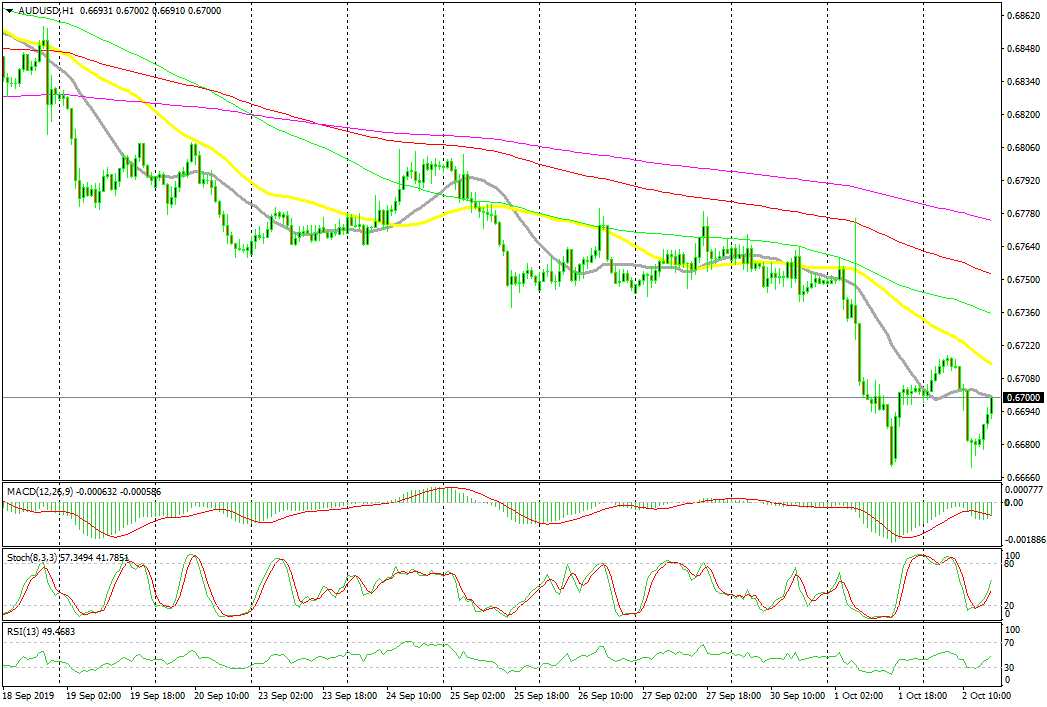 AUD/USD has been bearish for quite some time and it turned even more so after the third rate cut from the Reserve Bank of Australia earlier this week. The trend is pretty strong as the smaller period moving averages have been providing resistance recently. Today, we are seeing a retrace higher as the USD declines on the softer US ISM manufacturing figures from yesterday, but the 20 SMA is still holding as resistance. But, things are much worse for the AUD, so we decided to take this opportunity and go short on this pair.

Things have taken another turn for the worse now after the ISM manufacturing figures yesterday showed that this sector is heading into recession in the US, just like in Europe. This has brought back ghosts of another global economic recessions, so stock markets are slipping lower.