USD/JPY Trades Between 2 MAs Now, After Failing to Push Above the 100 SMA - Forex News by FX Leaders 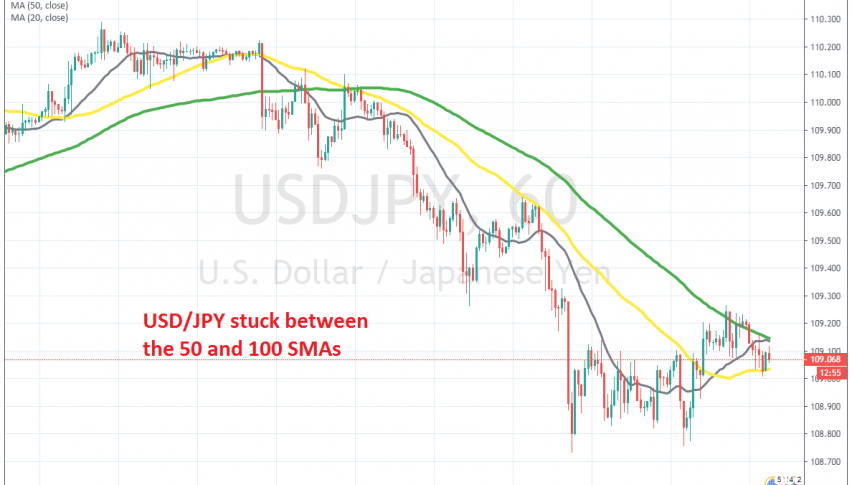 USD/JPY Trades Between 2 MAs Now, After Failing to Push Above the 100 SMA

On Monday we decided to go short on USD/JPY , This pair turned bearish in the last two weeks, as the sentiment turned negative in financial markets again, this time due to the corona-virus outbreak in China. Traders turned to safe havens and USD/JPY lost around 150 pips.

Moving averages such as the 20 SMA (grey) and the the 50 SMA (yellow) turned into resistance during pullbacks, thus pushing the price lower. USD/JPY had been consolidating in a range this week, forming a resistance area around the 109 level.

Yesterday the 50 SMA caught up with the price again and the price started reversing down from there. So, we decided to open a sell forex signal and that trade was going well for some time. But, the USD turned bullish after the positive US CB consumer confidence report and USD/JPY moved higher, breaking above the 50 SMA. But, the 100 SMA turned into resistance and the price reversed back down overnight, after failing to break above it.

The 50 SMA held the decline, which shows that it might be turning into support now. The price has bounced slightly higher from the 50 SMA, so USD/JPY is trading between these two moving averages now. Although, the pressure remains to the downside, since the coronavirus cases in China are increasing, so we will be holding on to this trade.