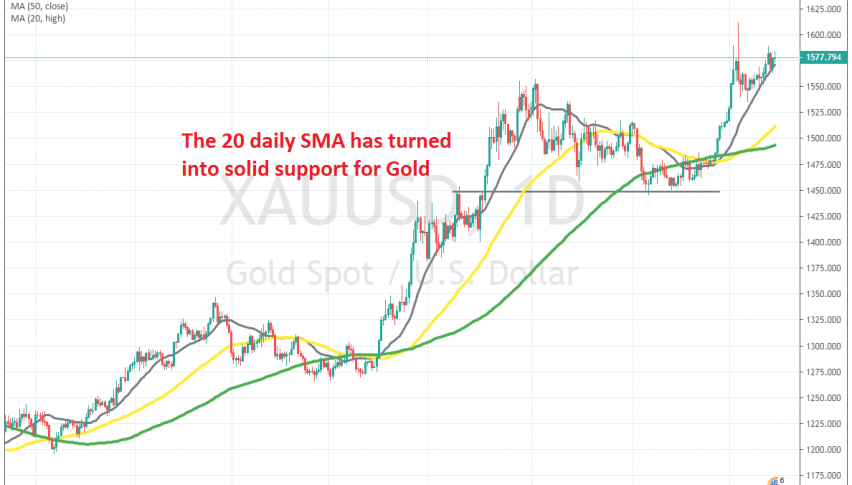 The uptrend continues for Gold

GOLD has been mostly bullish in 2019 as the sentiment has been mainly negative, due to an escalating trade war and a slowing global economy. This year the bullish trend resumed again and we saw some major moves to the upside, especially as tensions between US and Iran increased in the Middle East. We did see a pullback down in the last few months of last year, as the sentiment improved due to the Phase One deal prospects between US and China. But that pullback ended at the previous resistance at $1,450, which turned into support.

Tensions decreased after the US didn’t follow through after Iran’s attack on US military bases in Iraq. As a result, Gold retreated lower, but it still remained above the 20 SMA (grey) on the daily chart and once that moving average approached close enough, buyers became confident and the upside momentum resumed again.

The outbreak of the coronavirus in China turned the sentiment negative again in financial markets and fear turned the attention to safe havens again. As a result, the bullish momentum gained pace and this time the climb continued, with the 20 SMA pushing Gold higher. The sentiment is expected to be negative and Gold should remain bullish in the meantime.

Check out our free forex signals
Follow the top economic events on FX Leaders economic calendar
Trade better, discover more Forex Trading Strategies
Related Articles
USD Risk Tilted to the Upside, If Powell Disappoints Today
Markets are all pricing in a dovish FED today after raising rates by 25 bps, but Powell might repeat December's comments which will be hawki
2 hours ago