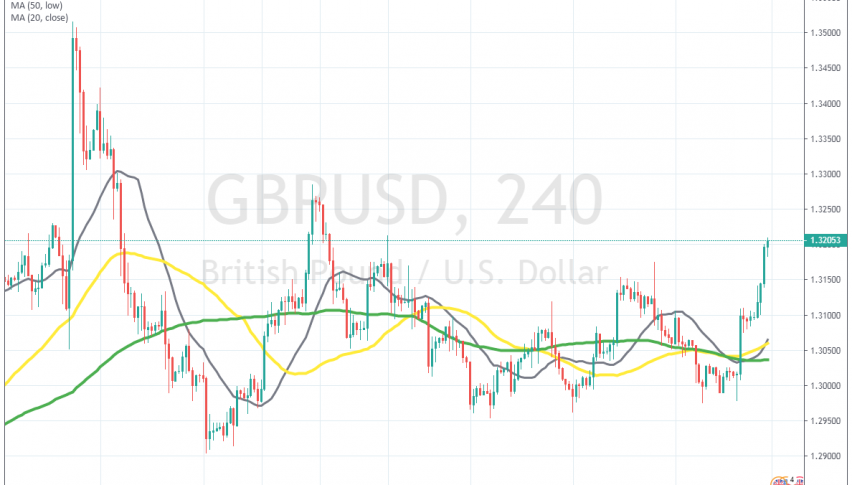 GBP Turns Bullish After the BOE Meeting, But Remains Cautious

GBP/USD has gained around 200 pips on the BOE event

The Bank of England (BOE) meeting on Thursday was going to be an important one for the GBP. The Brexit path for the UK and politics in the country became much clearer after the Boris Johnson won a strong majority in the general elections in December. This opened the door for the BOE to finally make a decision and take action, after the UK economy has been weakening for more than a year.

But, we have seen some green shots recently, such as the construction output in the last report, services jumped higher in January, leaving contraction behind, while earnings stopped cooling off and still remain at a decent level. On the other hand, inflation has been also cooling off and seems  to be heading towards 1% and coronavirus is a real threat for any country.
So, what were the key scenarios heading into the BOE on Thursday?

The votes should be at least a 7-2 in this scenario in favour of cutting obviously, but the dovish part of the decision will stem from how the central bank communicates the outlook moving forward. If they continue to see inflation softening further and warning signs that there is a potential for more than one rate cut this year, this will lead to a decline for the GBP, as markets start to price in potential future cuts by the BOE considering the softer inflation outlook.
Add to the fact that the BOE is likely to reaffirm that Brexit risks have eased slightly and economic sentiment has improved a little – but there are still risks to the outlook – markets will keep the focus on the change in forward guidance as such. In such a scenario, the GBP would turn bearish, with GBP/USD heading towards 1.25 again.

In this case, MPC votes should be around a 5-4 or 6-3 and the rest will come down to the details of the decision instead. The most important will be whether or not the BOE hints that this is a one-and-done scenario, or there is scope for more rate cuts down the road. They could also play it a bit coy by mentioning data dependency, like wait and see mode before responding.
The mixed voting picture should also offer some uncertainty over whether or not there will be any further rate cuts – a positive development for the pound. Then, we would have to try and evaluating the BOE communicates on the UK economic outlook. Depending on the details here, I reckon we could see cable price action center around 1.2900 to 1.3100.

The votes would be a 4-5 or 3-6 in this case and once much like the above, it would have to come down to the details of the decision. In this instance, the BOE could either keep the language from the last meeting or shift the rates guidance to something more realistic i.e. hinting at a possible cut instead.
The bias in this scenario would be for the GBP to gain as markets respond to the initial decision but the details and the press conference would still determine how far the gains can go. If the BOE held rates unchanged, but hinted that a rate cut will come, the climb in the GBP should be to strong. In such a scenario, I reckon we could see cable move towards 1.3150 to 1.3200 in response.

The votes should be a 2-7 in this scenario, reflecting a similar stance voting stance in December and the details of the statement will be kept largely unchanged. If the rates guidance remains similar and the BOE spins the economic outlook to be a tad bit more positive, that could really give the pound some wings to fly in the aftermath of the decision later today.
It will all depend on whether or not there are any signals for potential rate cuts but if the BOE avoids to answer that at all costs, there is scope for the pound to gain strongly. I think we would see cable back up towards 1.3200 initially before chasing further gains down the road, potentially moving towards 1.3300 to 1.3400 depending on the USD as well as incoming UK data.
The risk here though is that the BOE may fall into the inflation trap and would have to admit to a policy misstep. Hence, I would view this scenario as unlikely but if it does happen, any solid rallies in the GBP may have to be a bit careful not to overdo it.
The Bank of England kept interest rates on hold, against 50/50 expectations of a rate cut in this meeting. The statement didn’t sound too dovish either, while the main comments of the press conference from chairman Mark Carney are listed below.

As you can see, the press conference is quite balanced, which in this case seems sort of hawkish, considering that half of the analysts were expecting a cut and a dovish BOE, following on from the last meeting. So, this turned out to be good for the GBP.

The odds of a rate cut now have declined considerably, from around 50% a few days ago, to 27.4%. The GBP turned bullish immediately after the rate decision and the statement which was released in the sate time, and GBP/USD climbed around 100 pips. The US turned bullish on Friday, so the upside stretched further above 1.32, so this event turned out pretty good for the GBP and GBP/USD. Although, buyers should still be careful not to get too greedy, because the data will have it as say in the coming weeks and coronavirus cases are still going up.