Buying the Pullback in USD/CAD, as MAs are Keeping it Bullish - Forex News by FX Leaders 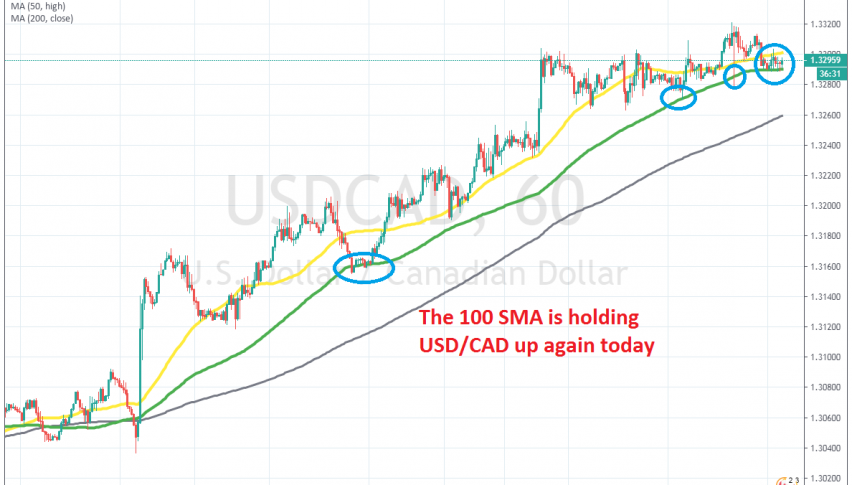 Buying the Pullback in USD/CAD, as MAs are Keeping it Bullish

USD/CAD turned bullish in the second week of January. This pair had been bearish during December, as the USD had a bad month back then and OPEC+ placed new quotas, curbing production further and sending Crude Oil higher. The CAD benefited from that, hence the decline in USD/CAD.

But, Crude Oil turned bearish after the tensions in the Middle East between US and Iran decreased early in January and the CAD turned bearish. The sentiment deteriorated after the breakout of coronavirus, which sent risk assets such as Commodity Dollars lower.

The sentiment has been negative for about a month due to the pandemic and USD/CAD has been bullish during this time as a result. Moving averages have helped keep the trend going for this pair, with the 50 SMA (yellow) providing support during pullbacks and pushing the price higher when the trend was stronger, while the 100 SMA (green) took up that job when the trend slowed a bit and retraces became deeper. Today, we are seeing a pullback down to the 100 SMA on the H1 chart, where we decided to go long, so we opened a buy signal just a while ago.

Selling Crude Oil Again, As the Pressure Remain to the Downside
23 hours ago