The GDP report couldn't move markets, which are stuck on coronavirus

Yesterday, the decline in stock markets stalled after being pretty bearish for two days, following the outbreak of coronavirus outside of China. It seemed like traders were exhausted from too much selling, so the decline stopped. But we knew it wouldn’t last too long, as coronavirus spreads in Europe, with new cases all over the continent.  New cases in other European countries have been increasing today as well, although WHO said that the jump in italy is due to testing errors. I hope it’s that since I’m pretty close to Italy at the moment.

As a result, we have seen stocks resume the bearish trend and take a tumble once again with US futures down by over 1% now and Treasury yields sinking, with 10-year yields down to record lows under 1.30%. The tumble in yields also weighed on the dollar earlier today, with the market now aggressively pricing in Fed rate cuts – fearing that the virus outbreak will dampen the US economy. An April rate cut is more or less fully priced in with the next one seen in July and a third rate cut slowly being priced in for December currently. hence the climb in EUR/USD this week, because the Euro doesn’t really have anything to be optimistic about right now. 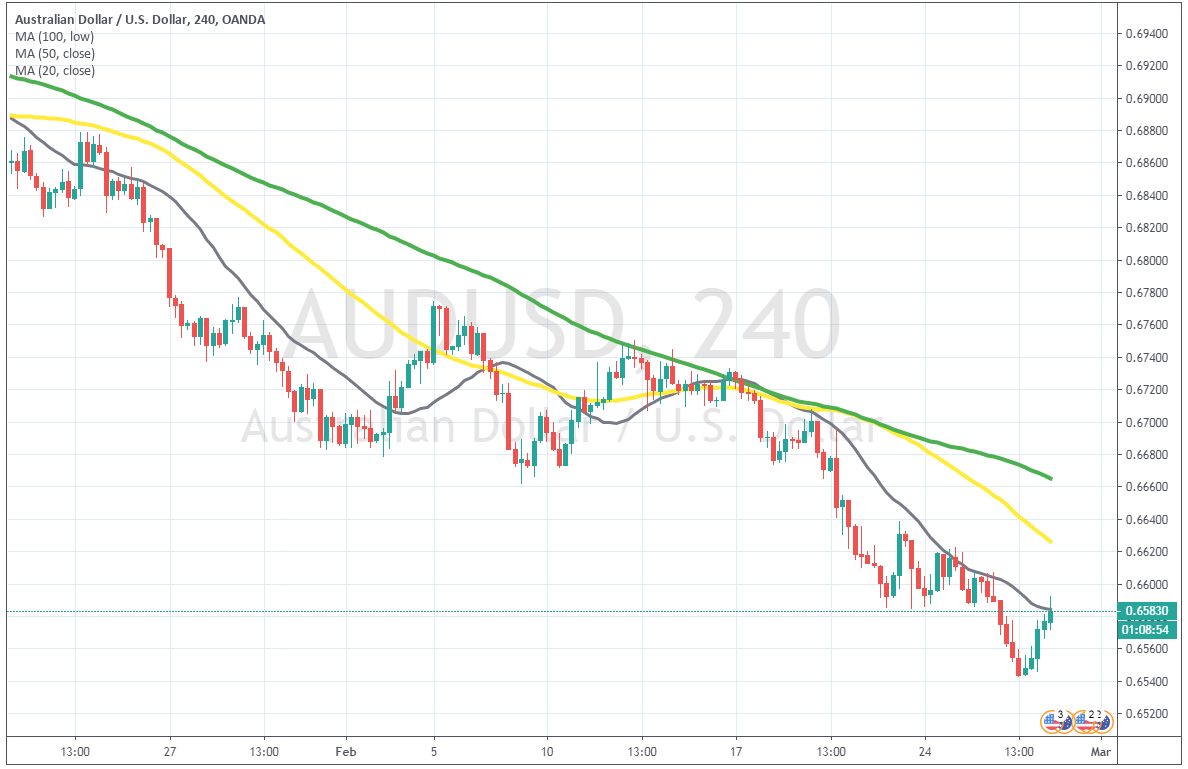 AUD/USD has turned bearish since early this year. Tensions in the Middle East, and then the outbreak of coronavirus proved to have a bigger impact on markets, than the Phase One trade deal. Since then, the trend has been completely bearish, as the sentiment remains strongly negative. During this time, moving averages have been doing a great job in providing resistance and pushing this pair down. AUD/USD has lost around 500 pips since early January and it doesn’t seem like the decline is going to top anytime soon, not as long as coronavirus spreads, especially in East Asia.

On the other hand, if the virus spreads further in US and around the globe, the world economy will likely weaken and the FED will start cutting interest rates again. Anyway, the main trend still remains bearish and MAs are still providing resistance. The 20 SMA (grey) was rejecting the price earlier, so we decided to open a sell signal in this pair.

The second estimate for the US GDP report for Q4 of last year and the durable goods orders for January leaned towards the positive side. That helped the USD, which was retreating, as odds of the FED cutting interest rates again increase, with the increase in coronavirus cases around the globe.

Forex Signals Brief for June 28: Atlanta FED US GDP Up 3 pts After Strong Orders
4 days ago

Remaining Short on EUR/USD, As US Durable Goods Raise for the 7th Month
5 days ago