AUD/USD Consolidates in a Choppy Range – Traders Brace for a Breakout!  - Forex News by FX Leaders 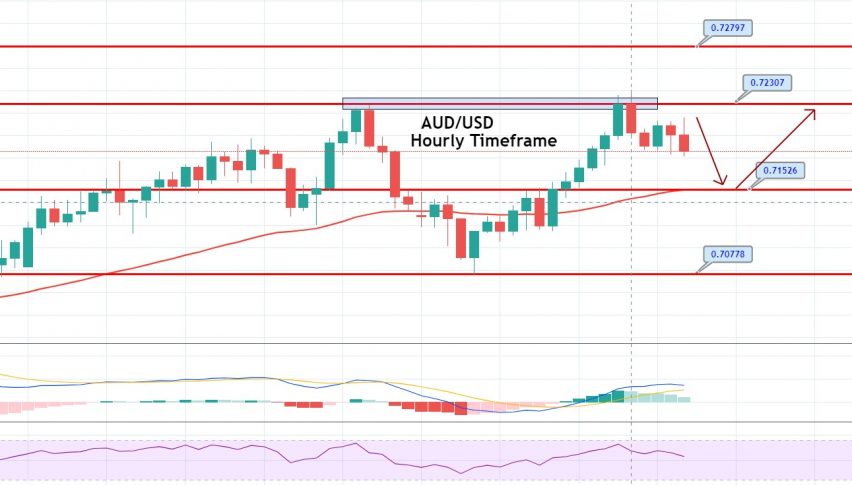 AUD/USD Consolidates in a Choppy Range – Traders Brace for a Breakout!

The AUD/USD pair closed at 0.71910, after placing a high of 0.72407 and a low of 0.71420. Overall, the movement of AUD/USD pair remained bullish throughout the day. The AUD/USD pair climbed further, beyond the 0.7200 level, posting the highest levels since February 2019 on Wednesday, based on the weakness of the broad-based US dollar.

The pair moved in the upward direction, ahead of the main key event, namely the ISM Non-Manufacturing PMI data released on Wednesday. However, after the release of positive data, the pair lost most of its daily gains, but still managed to remain bullish.

The ever-increasing number of coronavirus cases from the US halted the hopes for quick economic recovery and made investors cautious about placing any bids in the US dollar, and this kept the greenback under pressure. The selling bias for the broad-based US dollar was further supported by the delay and the lack of news about the new US fiscal stimulus from the US Congress. It is assumed that the Republicans and the Democrats are finding it difficult to reach an agreement on the stimulus package, despite the White House negotiators having vowed to work around the clock to reach a deal by the end of this week.

On the economic data front, the US ADP report on private job creation in July showed a figure of 167,000 jobs, compared to an anticipated 1,200 K. This data weighed heavily on the US dollar, ultimately adding to the AUD/USD pair. Meanwhile, the ISM Non-Manufacturing PMI rose unexpectedly to 58.1, against the projected 55.0, impressing the USD bulls.

On the US-China front, some days previously, the former Australian Prime Minister and Chinese scholar Kevin Rudd wrote in the foreign affairs journal, that the risk of armed conflict between the United States and China within the next three months, was especially high.

However, on Wednesday, Beijing’s ambassador to Washington said that China did not want to see a Cold War break out between China and the US. He made suggestions to both countries, advising them to work on correcting their relationship, which was currently under extraordinary stress.

Meanwhile, on Wednesday, a huge explosion blasted the port area of Beirut, Lebanon. It was caused by 2,750 tons of ammonium nitrate, which had been stored unsafely in a warehouse. Ammonium nitrate is used as a fertilizer in agriculture and also as an explosive. The escalating US-China tensions and the blast in Lebanon both affected the risk sentiment on the market, and as a result, the Aussie, which is perceived as risky, remained under stress, causing a loss in the daily gains of the AUD/USD pair on Wednesday.

The AUD/USD pair forms an ascending triangle pattern that supports the Aussie at around 0.7180, with the double top resistance level at 0.7230. A bullish bias seems dominant today, as the RSI and 50 EMA support upward momentum in the Aussie/Dollar pair. On the higher side, violation of the 0.7230 mark could lead AUD/USD prices towards 0.7280 and even higher. In contrast, support will be found at around 0.7150. Good luck!