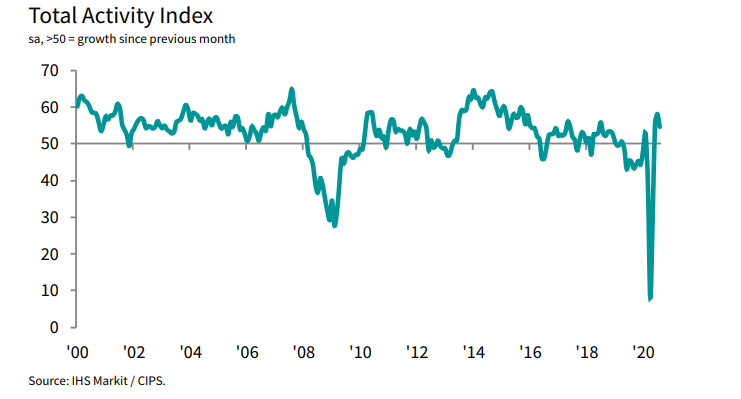 Together with services, the construction sector is one of the most important in the UK. But in April, it dived to the lowest level ever, falling further than any other sector, at 8 points, with 50 being the break-even. But, construction is quite resilient, and it bounced back up as the country reopened, climbing to 58.1 points in July, which is impressive, even for normal times.

Today’s report was expected to show another increase for August, but we saw a reversal down and the Bank of England is thinking about more monetary easing if the weakness increases. Below, you will find the construction report and some comments by the BOE:

The recovery in the UK construction sector slowed a little in August, with civil engineering work slumping back into contraction territory, while both commercial and home building activity lost impetus, as the rebound lost some momentum. The bright side is that business expectations continued to improve, rising to a six-month high, but it remains to be seen how well such optimism can hold up, as we move towards the end of the government’s furlough program and the Brexit closure.

“The latest PMI data signalled a setback for the UK construction sector, as the speed of recovery lost momentum for the first time since the reopening phase began in May. House building remained the best-performing area of construction activity, with strong growth helping to offset some of the weakness seen in commercial work and civil engineering activity. The main reason for the slowdown in total construction output growth was a reduced degree of catch-up on delayed projects and subsequent shortages of new work to replace completed contracts in August.

“Another month of widespread job-shedding highlighted the ongoing difficulties faced by UK construction companies, with order books often depleted, due to a slump in demand from sectors of the economy that have experienced the greatest impact from the pandemic.

“More positively for the employment outlook, business expectations climbed to a six-month high in August, as construction firms turned their hopes towards a boost from major infrastructure work and reoriented their sales focus on new areas of growth in the coming 12 months.”

This will just bring more attention to the issue of negative rates for the BOE, especially with the spectre of a no-deal Brexit looming and the government’s furlough program set to expire in October – bringing about negative economic risks. Add that to the likelihood that inflation pressures will remain subdued for longer, and you can see why the BOE is starting to prep the market for more action down the road. The pound has eased a little after Saunders’ remarks, with cable slipping from 1.3305 to 1.3290, but major currencies are still looking more mixed and taking a breather ahead of the release of the US jobs report later in the day.
Check out our free forex signals
Follow the top economic events on FX Leaders economic calendar
Trade better, discover more Forex Trading Strategies

BOE Sets up Taskforce to Study CBDC: Digital Pound in the Making?
3 hours ago