Is the Recent Bearishness in Polkadot Going to Turn Around Soon? - Forex News by FX Leaders 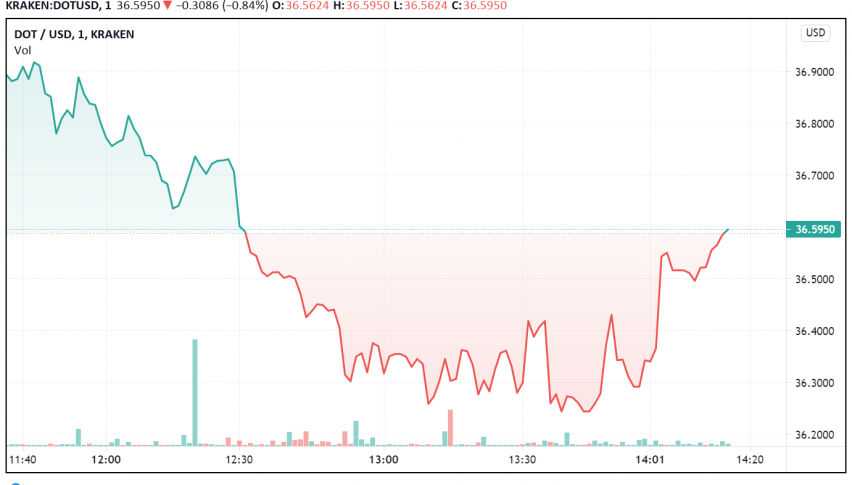 Is the Recent Bearishness in Polkadot Going to Turn Around Soon?

Polkadot experienced considerable interest among sellers, driving its price lower during the previous session, although the volatility appears to have eased somewhat into Friday. At the time of writing, DOT/USD is trading somewhat steady at around $36.60 after falling below the key $40 level.

DOT is likely to face the next support at $35, which will be of interest to watch as a break below this level could drive even more bearishness in the cryptocurrency. Technical indicators also signal the likelihood of further bearishness at the moment – confirming that the recent uptrend has exhausted and that sellers seem to be in charge for now.

On the fundamentals side, Polkadot is likely to face considerable downward pressure on recent developments related to Ethereum scaling. The ‘blockchain of blockchains’ as Polkadot is sometimes referred to has also been looked upon by many in the crypto community as a possible strong contender against Ethereum.

The recent interest in DOT was driven by a bearishness in Ethereum after gas fees and congestion on the network soared to highs and drove users and projects away in search of better alternatives. However, recently, Ethereum has confirmed the launch of the Optimism rollup that promises 100 times scaling before the introduction of sharding later this year.

While the immediate move in the cryptocurrency appears to be bearish, there seems to be some hope in the horizon as DOT price could soon rise again over the coming weeks. Long term indicators point to a possible bullish trend forming over the next week – while the RSI points to short-term selling pressure, the MACD points to an upcoming move towards the upside.