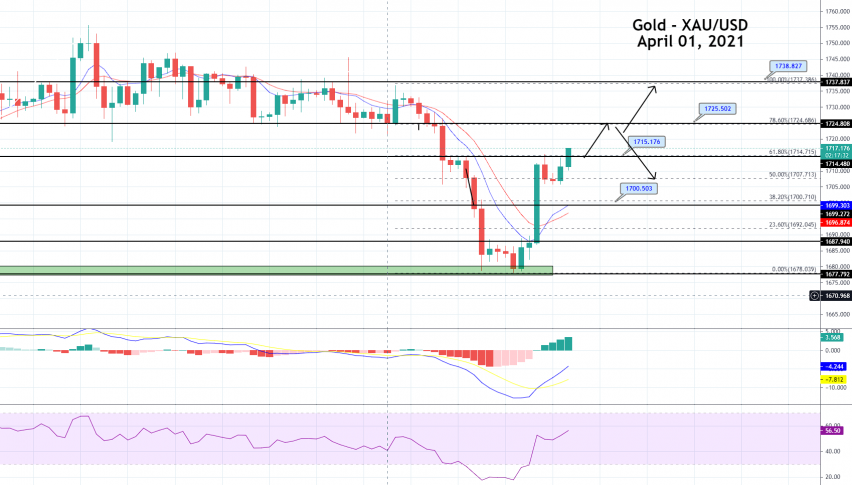 The precious metal GOLD prices closed at 1707.70 after placing a high of 1715.34 and a low of 1677.86. After placing losses for two consecutive days, gold settled higher on Wednesday and returned above the $1700 level. However, it suffered its biggest quarterly loss of 10% in over four years amid the rising Treasury yields and strong US dollar.

On Wednesday, gold prices rebounded and recovered most of their previous day’s losses as the long-awaited, and highly observed jobs data from the US came in against expectations and weighed on the US dollar. This resulted in a decline of the greenback value to 93.2 versus the previous 93.5. the Treasury yields on the US 10-year note also declined to 1.73% from an intraday high of 1.75%.

On the data front, at 17:15 GMT, the ADP Non-Farm Employment Change for March dropped to 517K against the expected 552K and weighed on the US dollar, adding to further gains in gold prices. At 18:45 GMT, the Chicago PMI rose to 66.3 against the forecast 61.2 and supported the US dollar, and capped further upside in the safe haven metal. At 19:00 GMT, the Pending Home Sales dropped to -10.6% against the expected -3.1% and weighed on the US dollar and added strength in the yellow metal prices. During the first quarter of 2021, multiple factors contributed to the dramatic decline in the precious metal, such as rising yields in the 10-year Treasury note, low inflation expectations, a strong US dollar, and a massive rise in the demand and popularity of cryptocurrency BITCOIN.

On Wednesday, US President Joe Biden introduced a $2 trillion package to form the first part of a likely $4 trillion infrastructure plan. The bill features substantial investments in transportation, broadband, and care workers. This, along with the $1.9 trillion stimulus package by the US government, added in the optimism for the economic recovery that added strength to the US dollar and kept the yellow metal under pressure for the first quarter of 2021.In general, these packages should have weighed heavily on the US dollar but these relief measures rallied the currency instead at the expense of gold on the argument that the US economic recovery from the pandemic could exceed expectations and lead to spiraling inflation because the Federal Reserve has been insisting on keeping the interest rates near zero.

Gold prices also gained on Wednesday because of the rising risk-off market sentiment amid fears of increasing coronavirus infections from the third wave of the virus. The third wave in European countries has forced them to extend their lockdown measures till April, and this prompted fears for delayed economic recovery that eventually raised safe-haven appeal in the market and supported the rising prices of the yellow metal. 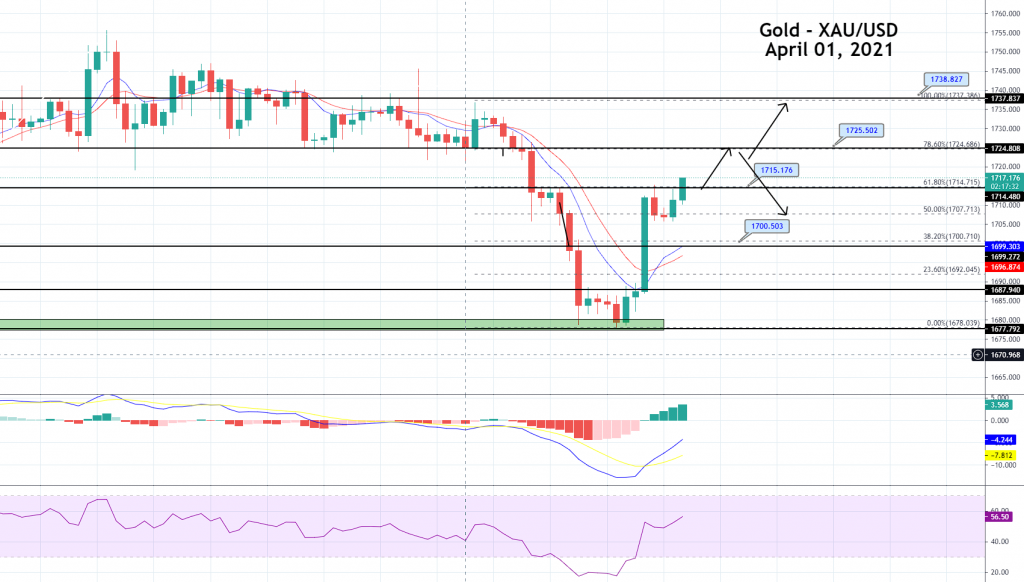 GOLD prices continue to trade with a solid bullish bias at 1,714 area, having completed 61.8% Fibonacci retracement at 1,714.70 level. The MACD and RSI suggest a strong bullish bias; therefore, the violation of the 1,715 level can lead the precious metal towards the next target level of 1,725. Whereas gold is likely to gain support at 1,707 level. The odds of a bullish breakout remain pretty solid; therefore, we consider opening a buy trade around 1,713 area to target 1,718/20 level today. Good luck!