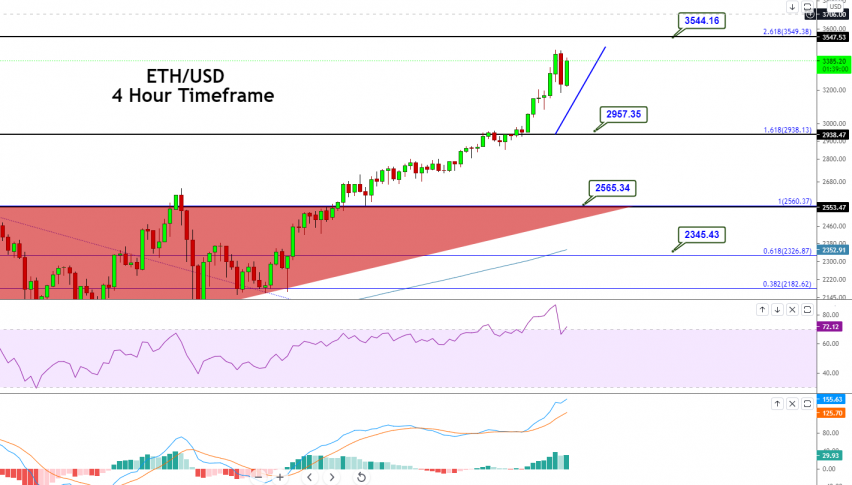 ETH/USD closed at $3427.54 after placing a high of $3427.54 and a low of $2952.01. ETH/USD extended its gains and rose for the ninth consecutive session on Monday and reached a new all-time high (ATH) at the $3427 level. Ethereum, the second-largest cryptocurrency by market cap and biggest rival to Bitcoin, surpassed the key $3000 milestone on Monday. The cryptocurrency rose surprisingly higher on Monday as the dominance of Bitcoin started reducing.

The rising prices of Ethereum made the co-founder Vitalik Buterin the youngest crypto billionaire as he reportedly holds over 330 thousand ETH, which amounts to more than $1 billion. The recent surge in Ethereum prices over the past four months has been associated with the success of digital collectibles and the NFT boom, along with the rise in DeFi products that are popular on the network.

S&P Dow Jones Indices launched three new cryptocurrency indices that will easily allow retail traders to gain exposure to BITCOIN and Ethereum. The new indices can be used as tracking and benchmarking tools in the legacy finance world. Three indices named Bitcoin Index, S&P Ethereum Index, and S&P Crypto Mega Cap Index will prevent investors from connecting to potentially shady cryptocurrency APIs that may not necessarily provide correct pricing data. S&P hopes that it will make it easier for investors to access the cryptocurrency asset class, and they claim that this will also reduce some of the risks of the speculative & volatile crypto market. This move from S&P added strength to Ethereum prices that were already high on the board. The crypto space was challenging mainstream institutions as Ethereum is currently overtaking several traditional institutions such as PayPal and Bank of America by market valuations. Ethereum-based Defi also passed a high of $78 billion and opened up opportunities for other tokens and coins to increase their market value. The reduced dominance of Bitcoin due to the increased number of other tokens drawing the market’s interest also helped Ethereum remain higher and rise continuously. 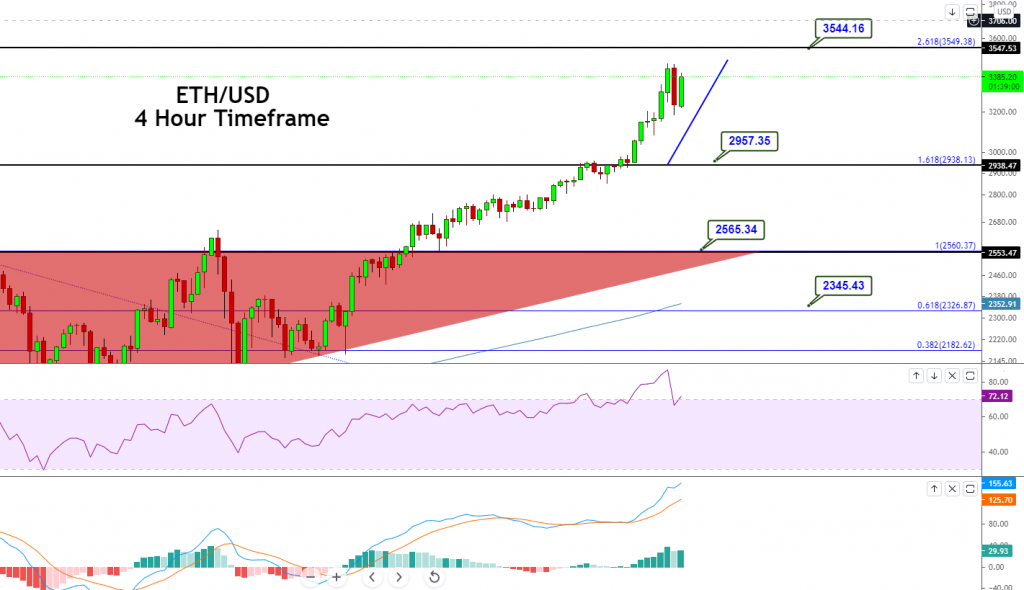 Support Resistance
3110.52 3586.05
2793.50 3744.56
2634.99 4061.58
Pivot Point: 3269.03
The ETH/USD pair is trading sharply bullish at 3,346 level, having violated the ascending triangle pattern on the 4-hour chart. On the higher side, ETH/USD is likely to face the next resistance at 3,465 level, and violation of this can extend buying trend until the 3,537 level. The pair is expected to gain support at the 3,181 and 2,937 levels today. The technical indicators such as RSI and MACD support a solid bullish trend; therefore, we should look for buying positions in the pair. Let’s consider taking a buy trade today over 2,950. Good luck!
BUY ETH/USD
Check out our free forex signals
Follow the top economic events on FX Leaders economic calendar
Trade better, discover more Forex Trading Strategies

A Decent Pullback in Ethereum at Last
2 days ago