The DOGE/USD crypto pair succeeded in extending its previous-long bullish rally and took some further bids well above the 0.5100 level. The price of Dogecoin is currently $0.507304, having risen significantly over the past months. The pair had hit the highest level at $0.6873 on May 6 before Elon Musk’s Saturday Night Live (SNL) appearance. It is worth recalling that DOGE/USD has climbed more than 27% this month so far and risen more than 720% since the start of April. Since the start of this year, the price of the DOGE cryptocurrency has climbed approximately 4,548%.

Behind these bullish moves could be the recent reports, in which a Dogecoin investor told that he became a millionaire within two months. He also added that he started investing in the doge cryptocurrency after being inspired by Tesla CEO, Elon Musk.

Furthermore, Dogecoin got additional support from a growing number of celebrities. Apart from this, the sentiment around was further improved after Tesla Chief Executive Elon Musk issued a survey via Twitter asking if Tesla should accept DOGE payments. It is worth mentioning that the survey had received 2.3 million votes, which shows that 77% of respondents favor using Dogecoin. This, in turn, raised its value, at least for now.In the meantime, Shark Tank star Mark Cuban’s NBA team, the Dallas Mavericks, has been accepting the cryptocurrency for payments, which also exerted a positive impact on the dogecoin. After Musk and Dallas Mavericks have done their part to support Dogecoin, the technologist said that SpaceX, the space research company, will also accept the cryptocurrency to fund a lunar mission next year. This, in turn, turned out to be one of the key factors that kept the doge/USD pair higher.

Conversely, the upticks in the safe-haven US dollar, backed by the combination of factors, were seen as one of the key factors that kept the lid on any additional gains in the Doge/USD pair. At the USD front, the broad-based US dollar flashing green on the day as investors are still favoring the safe-haven assets in the wake of risk-off market sentiment. 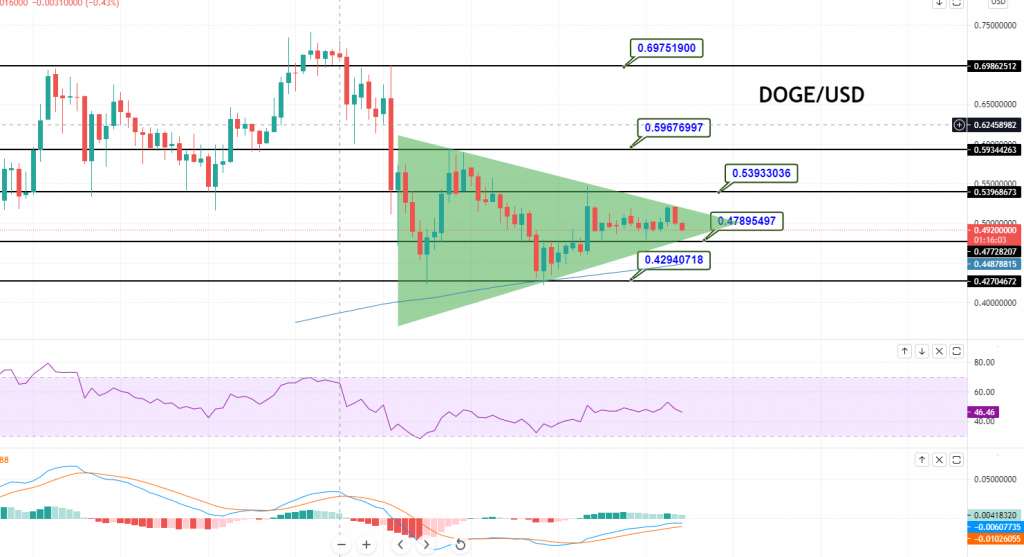