EUR/GBP Resumes the Downtrend Again, After Falling Below the 200 SMA - Forex News by FX Leaders

EUR/GBP Resumes the Downtrend Again, After Falling Below the 200 SMA

EUR/GBP used to be on a bearish trend since the beginning of this year, after the UK and EU reached a trade deal, validating the Brexit deal, which would be useless without the trade deal. As a result, this pair fell around 750 pips until early April, as the GBP kept pushing higher, while the Euro was declining.

Moving averages were doing a great job providing resistance on the way down. pushing the price lower. Although the price climbed above the moving averages by the beginning of April, as EUR/GBP retraced 250 pips higher.

But, the price turned back down, as the GBP started to gain some momentum, after the UK economy started to reopen, following a long winter lock-down. The price fell below moving averages and it seems like they have turned into resistance again now.

This pair retraced higher last Friday, but it was finding resistance at the 200 SMA (purple) where we decided to open a sell forex signal. Now, the 50 SMA (yellow) has also caught up with the price again and is adding further strength to that area. So, it seems like the retrace up might be over now and we are holding on to our trade, hoping that we will see a bearish move soon.

The 200 SMA Keeping Litecoin Subdued Today, But the Break Should Come
3 days ago

The Bullish Trend Will Resume in Litecoin, Once the 20 Weekly SMA Breaks
4 days ago 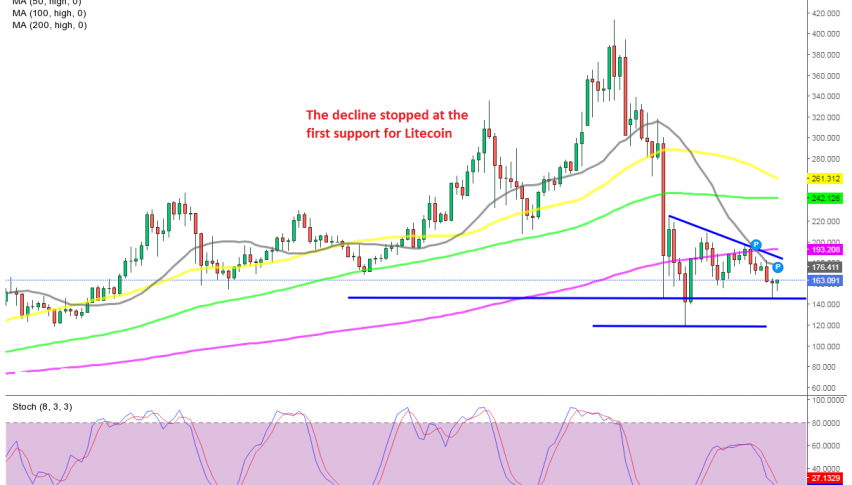