Bat Token and Dash Coin Make A Move to the Upside, While the Crypto Market Remains Little Changed - Forex News by FX Leaders 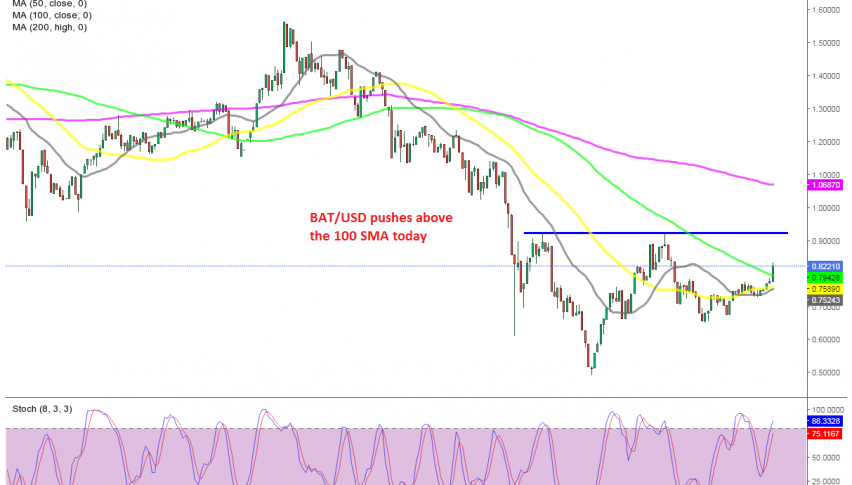 Bat Token and Dash Coin Make A Move to the Upside, While the Crypto Market Remains Little Changed

The cryptocurrency market have been finding it difficult to push higher and resume the larger bullish trend since the crash two weeks ago. Buyers have tried to get the bullish trend going, but they have failed which has left cryptocurrencies trading sideways in the last two weeks.

Although today we are seeing another attempt to resume the bullish trend in certain cryptos. Doge was the first to make a move up, after Coinbase decided to list this altcoin in its exchange. The second push came after Wall Street Journal posted a piece earlier, reporting that the Securities and Exchange Commission told Tesla last year that Chief Executive Elon Musk’s use of Twitter had twice violated a court-ordered policy requiring his tweets to be pre-approved by company lawyers.

BAT token also made a bullish move a while ago. It climbed above the 100 SMA (green) as shown on the H4 chart at the top. The 20 SM A(gray) turned into support yesterday, so the price action seems promising in BAT/USD right now.

DASH Has An Obstacle to Overcome

Will buyers push Dash above the 100 SMA?

The DASH coin also made a bullish move at last, after climbing above the 50 SMA (yellow). But, DASH/USD is facing the 100 SMA on the H4 chart now, which might turn into resistance. if buyers push above it soon, then the bullish momentum might gains some pace, otherwise we might see retreat back down to the 50 SMA, since the sentiment in crypto market is not turning bullish.

what are the chances bitcoin drops further down and crashes the whole market are we still going towards bearish? and until when?