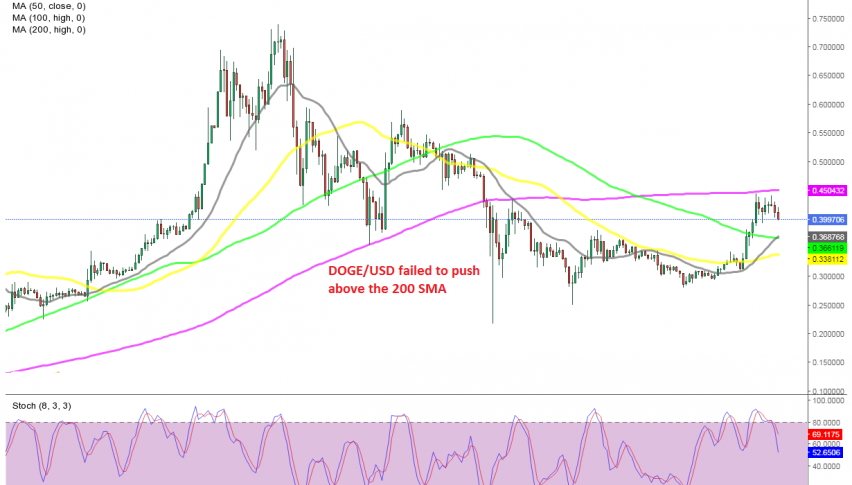 Cryptocurrencies are giving signs of life after trading sideways for more than a week. They tried to turn bullish a couple of times, but buyers failed to resume the larger bullish trend and eventually cryptos settled, trading within a range.

In the last several sessions though, we have sees some upside pressure in most digital coins, as they move above some moving averages. Doge starting the bullish momentum on Tuesday, after comments from Elon Musk, which weren’t about Doge,butthis crypto increases whenever Musk speaks about cryptos.

DOGE/USD increased from around $31 to $45, which means gaining nearly 50% of the value. But, the 200 SMA ( purple) which used to act as support on the H4 chart, turned into resistance and Doge has started to reverse. Now the price has retreated below $0.50m but perhaps the 100 SMA (green) or the 50 SMA (yellow) will turn into support now.

The bullish momentum LITECOIN wasn’t as strong as in Doge, but it slowly moved above the 50 SMA and he 20 SMA (gray), which turned into some sort of support recently. But, the 100 SMA turned into resistance for this altcoin, forming an upside-down pin below it, followed by a bearish candlestick. So, LTC/USD is retreating again after failing at the 100 SMA, but perhaps the smaller MAs will hold as support before the next bullish move.

Forex Signals Brief for September 29: US and Canada GDP Expected to Contract
2 days ago