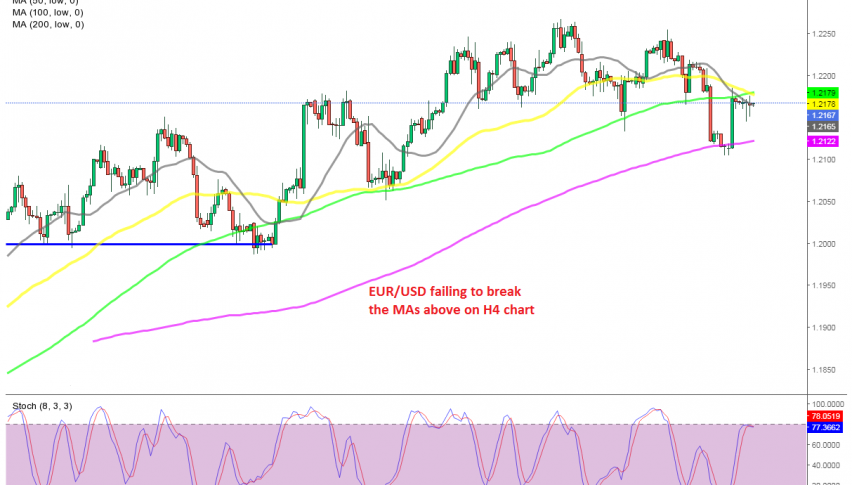 EUR/USD Forms a Bearish Reversing Pattern, Despite the Jump in Investor Confidence

Is the reversal coming after the failure to push higher?
BUY EUR/USD

The EUR/USD has been really bullish in the last two months, with the USD decline returning again in April, despite the economy picking up pace after a strong period in Q1. But it hasn’t been able to make new highs and push above the highs of early January.

That is a bearish signal, and since late May, this pair has actually been trying to turn bearish again. Today, the Eurozone investor confidence report was stronger than expected, but the EUR/USD hasn’t been able to push above the moving averages, after failing to do so late last week. Other major USD pairs have been increasing further today, but not this pair, which points down once the USD decline stops. Below is the investor confidence data for this month:

That’s a decent beat and reaffirms the more optimistic sentiment towards the euro area economy as of late. This isn’t going to move the needle in the euro for now, but it does reflect better prospects going into the summer, though it still remains to be seen what the ECB has to offer later this week.

EUR/USD
Check out our free forex signals
Follow the top economic events on FX Leaders economic calendar
Trade better, discover more Forex Trading Strategies
Related Articles
Can the ECB Keep the Rate Hike Pace as Eurozone GDP Contracts?
EUR/USD has been bullish since October, but the move might have come to an end and we are seeing a slow reversal lower ahead of the ECB
6 hours ago

Forex Signals Brief for January 31: Will EU GDP Decline In Q4 Be Bigger After Yesterday's German GDP?
8 hours ago