Litecoin Forecast: Getting Squeezed Between the Daily SMAs Before the Breakout? - Forex News by FX Leaders 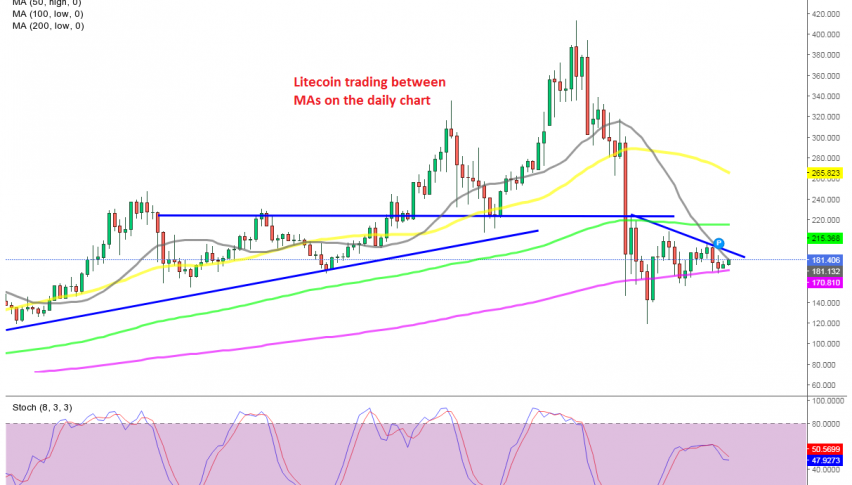 Litecoin Forecast: Getting Squeezed Between the Daily SMAs Before the Breakout?

It seems like cryptocurrencies have been trying to take a breath in the last two weeks after the crash in May, with the price action becoming quieter in the last week. This shows that uncertainty remains high in this market, as both buyers and sellers remain hesitant.

The 200 SMA (purple) held as support on the first attempt and we saw a bounce off that moving average on the daily chart. But, the bounce ended at the 100 daily SMA (green) which turned into resistance, and Litecoin resumed the crash again.

This time, buyers broke well below the 200 SMA, but they couldn’t hold the price down there, because the crash in the crypto market ended and cryptocurrencies started to reverse higher. The price moved above the 200 SMA again, but it couldn’t even reach the 100 SMA this time, before reversing down again.

The highs have been getting lower since then, while the lows have been getting higher, as the 200 SMA continues to act as support and keeps pushing the lows higher. At the top, a descending trend line has formed, connecting the falling highs, while now the 20 SMA (gray) has been caught up and is also providing resistance.

So, Litecoin is getting squeezed between these two MAs now, and a breakout is expected soon. Although, I wouldn’t expect a major move during the breakout, unless the whole crypto market makes a decisive move. So until the sentiment changes, Litecoin will remain around these levels.