The XMR/USD Cryptocurrency pair extended its upward rally of the previous session and drew some further bids above the $282.00 level. Monero has gone up by 0.32% in the last 24 hours, supported by the weaker US dollar. The greenback fell somewhat on the day, because investors were trying to determine whether the Federal Reserve would change its stance regarding its stimulus, after a recent hike in US inflation. Apart from this, the buying bias surrounding the Monero prices could also be tied to the fact that Monero is based on the principles of security, privacy and decentralization.

As per the Monero team: “Monero continues to grow, with privacy and security goals first, ease of use and efficiency second.” They added that Monero uses high-level cryptography to hide the identities of senders and recipients. The XMR/USD is currently trading at 283.801, and consolidating in the range between 271.761 and 283.962.

Monero’s developer team has made numerous significant improvements to Monero since its launch. They have migrated the blockchain to a different database structure, in order to increase its flexibility and efficiency. They have also set minimum ring signature sizes, which is seen as one of the key factors that is underpinning the Monero prices.

The Monero continues to grow with its privacy and security goals, and it utilizes high-level cryptography to hide the identities of senders and recipients. As a result, hackers are increasingly choosing the Monero coin for privacy-centered cryptocurrency, instead of Bitcoin. As we all know, the identity of parties involved in Bitcoin transactions can easily be traced, because the blockchain is public and transparent. This is why more and more people are choosing the Monero coin over Bitcoin, and this rising interest could push the value of Monero further up. 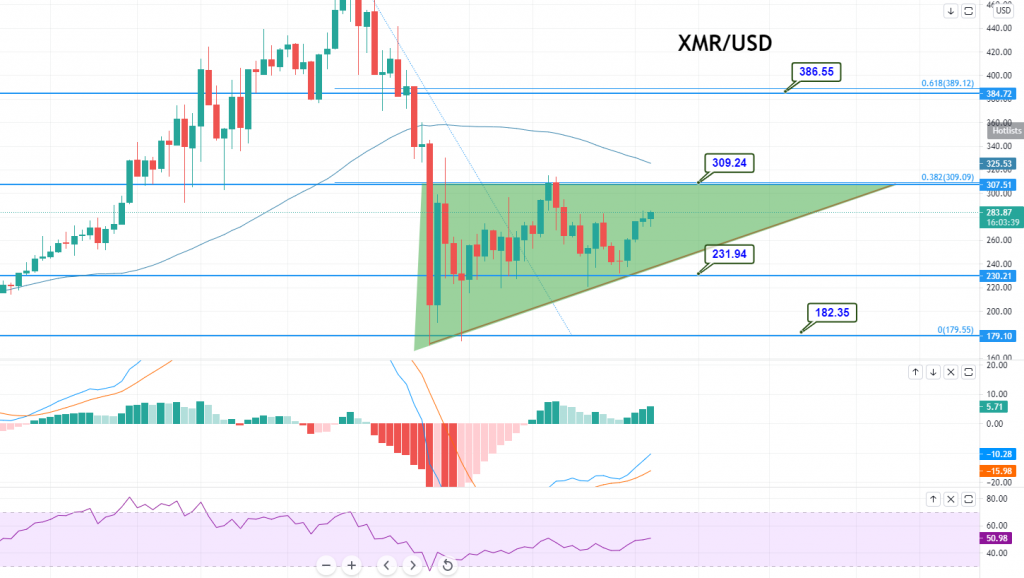 The XMR/USD pair is trading with a bullish bias at 286.85, heading north towards the double top resistance level of 309. The Monero has formed an ascending triangle pattern and a three white solider’s pattern, which demonstrate a strong bullish sentiment among investors. The daily  50 EMA timeframe suggests an upward trend in the coin, while the immediate support continues to underpin around the 271 and 232 levels. The MACD and RSI support a buying trend; therefore, we should be looking for buy opportunities in the XMR/USD pair. Check out the FXLeaders trading signals page for more updates on the Monero signal. Good luck!
Check out our free forex signals
Follow the top economic events on FX Leaders economic calendar
Trade better, discover more Forex Trading Strategies
Related Articles