The BTC/USD coin pair managed to extend its bullish rally of the previous day, and it is still trading in a positive zone above the $39,500 level against the US dollar. The Bitcoin must settle above $40,000 for a sustained upward move in the near term. It has started a steady increase, and it even broke the $39,500 level and the 100 hourly simple moving average. However, the buyers keep struggling to break the $40,000 zone.

The bullish bias surrounding Bitcoin could be associated with the latest report from the infamous trader behind the movie “The Wolf of Wall Street”, Jordan Belfort, suggesting that he believes “massive” regulations in the cryptocurrency space would be beneficial for Bitcoin, Ether and stablecoins. He has shared a bullish view on the BTC and ETH future prices. Moreover, the upticks in the BTC got some additional lift after the hash rate securing Bitcoin and Ethereum recovered, as some Chinese miners have now relocated.

In simple words, the latest improvement in the hash rate suggests that some Chinese miners have completed their relocation process and have subsequently plugged in. After China’s crackdown, a New York Stock Exchange-listed Bitcoin miner reported that it would ship 3,000 units to Kazakhstan by July. In a statement, BIT Mining said it had shipped and deployed around 3,819 units of BTC mining equipment, with a total hash rate of 172 PH/s to plants in Kazakhstan. This progress in the hash rate tends to impact the BTC and ETH prices positively.

The ETH/USD coin pair maintained its gaining streak of the previous day, drawing some further bids above the $2,400 level. Ethereum is up by roughly 5%, and it has broken the $2,400 resistance against the US Dollar. The ETH price has outpaced BTC, and it seems like there are chances of more upsides above $2,450. ETH recently made a support base above $2,250 and started a fresh increase, outpacing Bitcoin.

The ETH price gained strength, breaking the main $2,300 and $2,400 resistance levels. The price even climbed above the $2,400 level and the 100 hourly simple moving average. This, in turn, raised the probability of more gains, and the price traded as high as $2,450. It is now correcting gains from the $2,450 resistance zone. Ether surrounds the 23.6% Fib retracement level of the upward wave, from the $2,303 downward swing to a high of $2,451. The price of ETH could continue to rise in the near term if it remains stable at $2,340. Ethereum resistance to the upside remains around the $2,450 level.

ETH/USD
The ongoing buying bias in the Ethereum price could be attributed to the latest positive remarks by the infamous trader, Jordan Belfort, who is the character behind the movie “The Wolf of Wall Street”. Belfort noted that he believes “massive” regulations in terms of cryptocurrencies will be seen as beneficial factors for cryptos such as Bitcoin, Ether and stablecoins. He pointed to regulators taming the junk bond market and its growth thereafter.

In addition to this, investor confidence over the future of ETH increased further after recovery of the hash rate securing Bitcoin and Ethereum, due to some Chinese miners having completed their relocations. It is worth recalling that the hash rate on Ethereum dropped by 20% after China’s crackdown orders but has steadily recovered to above 500 terahashes per second. Thus, the recovery in the hash rate suggests that some Chinese miners have completed their relocation process and have subsequently plugged in. So, the progress in the hash rate has apparently left a positive impact on the ETH prices.

The LTC/USD crypto pair extended its early-day upward rally and drew some further bids around the 141.00 level on the day. The LTC/USD coin pair is currently trading at around $141.570, and once it manages to exceed the potential resistance at $140, the break above this level is expected to pull the coin prices towards $150 in the coming trading sessions.

LTC/USD is trading around the resistance level of $141.315, after touching the daily high of $143.787 in the early hours of today. The fresh buying bias surrounding the LTC prices could easily pave the way for gains above $150 and towards $160. Thus, if the technical indicator, the Relative Strength Index (14), crosses above the 50-level, the market may show that the bullish grip is getting stronger. However, the latest move pushed LTC’s market cap up to $9.198B, or 0.60% of the total cryptocurrency market cap.

At its peak, Litecoin’s market cap was $25.609B. Litecoin has seen a surge in value, having gained 14.57% over the past 7 days. The volume of Litecoin traded in the 24-hours until the time of writing was $1.591B, or 1.70% of the total volume of all cryptocurrencies. LTC has traded in a range of $104.0494 to $143.787 in the past seven days. The ongoing strong performance of the broad-based US dollar could cap further gains in the LTC/USD coin pair.On the USD front, the broad-based US dollar extended the previous day’s bullish rally, remaining well bid on the day, as the downbeat market mood tends to underpin the safe-haven assets, including the greenback. However, the gains in the US dollar could be short-lived, as the US Federal Reserve maintained a dovish stance in its latest policy decision, which may push the American currency down. Meanwhile, the disappointing US economic data also curbed the month-long rally of the USD. Anyhow, the gains in the US dollar were seen as a critical factor that capped any further gains in the LTC prices.

The XRP is trading at $0.74335, with a 24-hour trading volume of $3,486,657,358. XRP has risen by 5.59% in the past twenty-four hours. However, the buying bias in Ripple mainly appeared after Ripple announced a new payment corridor in Japan. The payment solution company, Ripple, announced the launch of a new corridor between Japan and the Philippines. This is the company’s first On-Demand Liquidity (ODL), a payment solution that leverages token XRP, in Japan. The positive progress exerted a notable bullish impact on the Ripple prices.

According to Ripple’s Q2 report, XRP, which is the 6th-biggest cryptocurrency by market cap, saw its trading volume rise to $4.4 billion in the second quarter of the year, logging a 98 percent quarter-over-quarter increase. It should be noted that XRP has also recently experienced 4 days with the highest trading volume throughout its entire history. This latest achievement also played a significant role in supporting the XRP prices.In contrast to this, the gains were capped by the strength of the broad-based US dollar. The broad-based US dollar maintained its early-day bullish rally and remained well bid on the day, as the downbeat market mood tends to underpin the safe-haven assets, including the US dollar. However, the gains in the US dollar could be temporary, due to the dovish stance taken by the US Federal Reserve in its latest policy decision, which has undermined the greenback. The disappointing US economic data also curbed the month-long rally for the American currency. The gains in the US dollar were seen as a key factor that capped further gains in the XRP prices.

The DOGE/USD coin has maintained its overnight winning streak, remaining well on Friday. The uptrend in Dogecoin could be associated with multiple reasons, for instance, Burger King Brazil has announced that customers can now purchase “dogpper” dog food using the Dogecoin (DOGE) cryptocurrency.

This headline left its bullish impact on Dogecoin. Meanwhile, YouTuber Steven Steele, who discusses various cryptocurrency-related topics on his channel, has suggested that AMC should start accepting Dogecoin as a payment method. Steele’s approach appears to be resonating with Doge fans. Dogecoin buyer Elon Musk himself seems to have “liked” Steele’s tweet. This helped Dogecoin to stay bullish this week.Currently, the Dogecoin price is trading near $0.199314, with a 24-hour trading volume of $1,194,515,940. Dogecoin has gone up by 0.42% in the last twenty-four hours. However, the upticks in the DOGE price could be capped, as the stronger US dollar is trying to undermine the DOGE/USD coin pair. The broad-based greenback maintained its early-day upward rally and remained bullish on the day as investors turned to the safe-haven assets, in the wake of a risk-off market sentiment. Thus, the upticks in the US dollar were seen as one of the key factors that kept the DOGE/USD coin pair under pressure. 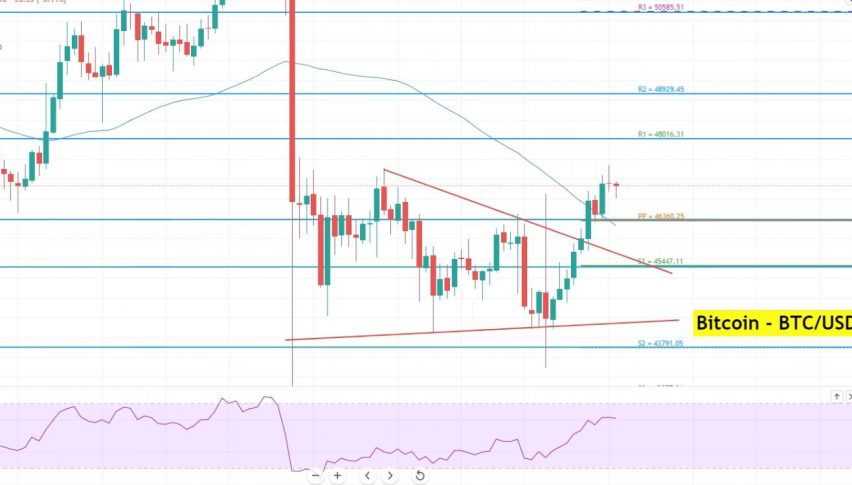 Bitcoin Violates Downward Trendline at 46,360 - What's Next?
5 days ago