Bitcoin Violates Pivot Point at 48,400 – What to Expect Next - Forex News by FX Leaders 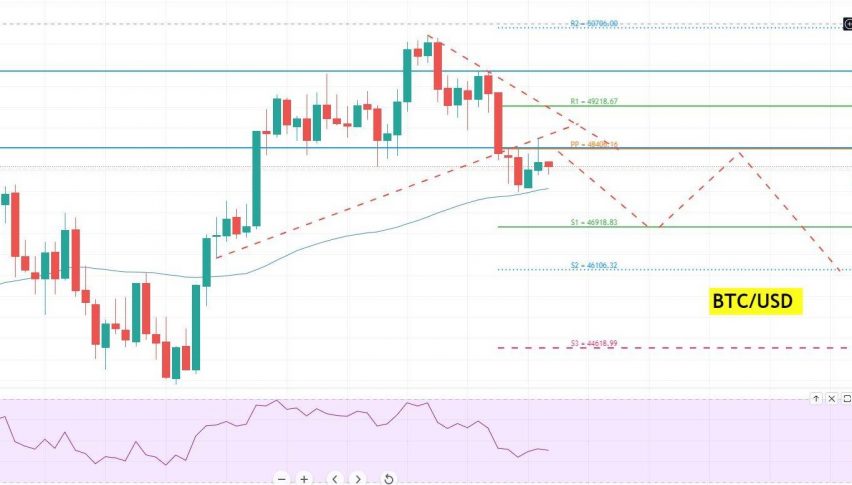 Bitcoin Violates Pivot Point at 48,400 – What to Expect Next

The BTC/USD turned red on Tuesday, when the regulators in Yingijang County in China’s Yunnan province asked hydropower plants to stop supplying power to Bitcoin mining establishments. The office of the People’s government of Yingjiang County issued a notice stating that power plants had until Tuesday, August 24, to remove mining companies from their supply grid.

If the plants fail to cut mining facilities from the illegal supply via their grid, the officials will forcibly disconnect the supply to Bitcoin mining facilities within their jurisdiction. This news put added pressure on BTC/USD, which was already declining due to profit-taking.

The notice issued by the government of Yingjiang County also requires the power plants to report to China’s National Development and Reform Commission regarding the delisting of mining facilities. In this way, the government will track the illegal supply of power to Bitcoin miners, and know that their enforcement efforts are working efficiently.

On the other hand, the US banking giant, Citigroup, is waiting for the approval of Bitcoin futures, in order to begin trading on the Chicago Mercantile Exchange. The bank is seeing an increased demand from its clients, for Bitcoin exposure, and if it obtains approval, Citibank will join the ranks of Goldman Sachs, to become the second major bank to offer Bitcoin futures trading.

Conversely, Europe is set to launch its first Bitcoin futures, while the US struggles to obtain the necessary approval. According to a digital asset-backed securities provider, ETC Group, its Bitcoin ETN futures will start trading on September 13. This news came in as the US banking giant, Citigroup, awaited approval of its Bitcoin futures, which weighed on the market sentiment, adding to the losses in BTC/USD.

Meanwhile, the President of El Salvador, Nayib Bukele, has tried to reassure residents that implementing the Bitcoin Law will have positive life-changing effects. The law is scheduled to take effect on September 7, and authorities worldwide, even the opposition party members, are highlighting the issues that could emerge from the commencement of this law. Bukele is confident that Bitcoin will significantly alleviate the economic woes the country faces.

Bukele also introduced infrastructureplans, whereby about 200 automated teller machines and 50 branches would be put in place, to allow residents to convert Bitcoin into US dollars, as of September 7, when the Bitcoin Law takes effect. This news caused a further drop in BTC/USD on Tuesday. 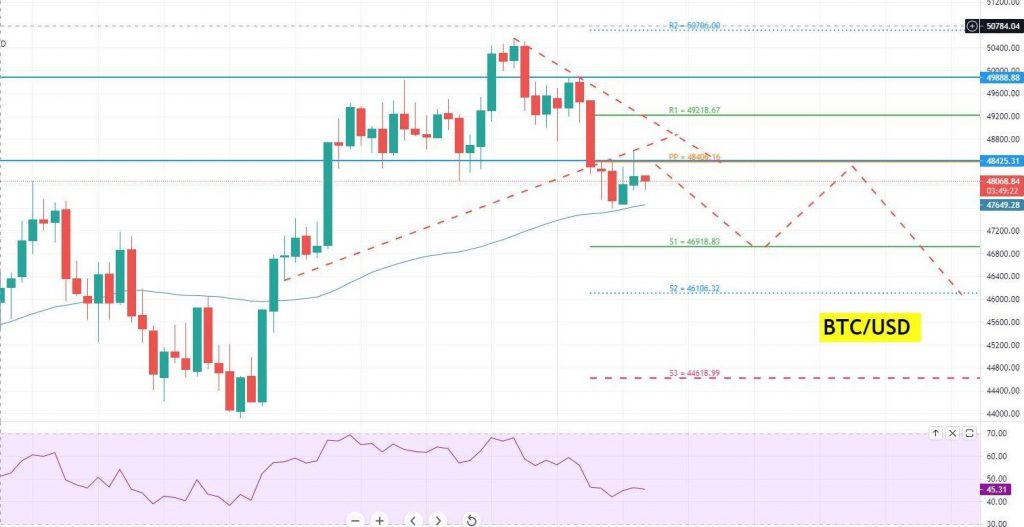 BTC/USD, the most popular cryptocurrency pair, is currently trading at 48,420, having breached the pivot point support mark of 48,603. On the lower side, the BTC/USD pair is testing a new support level of around 47,725 pips.

A breach of the 48,600 resistance level, on the other hand, would expose Bitcoin to levels of 49,484 and 50500. The RSI and the 50 EMA both point to a sell signal. The emphasis should stay on 48,600, as there is still a strong selling tendency below this level. Best wishes!