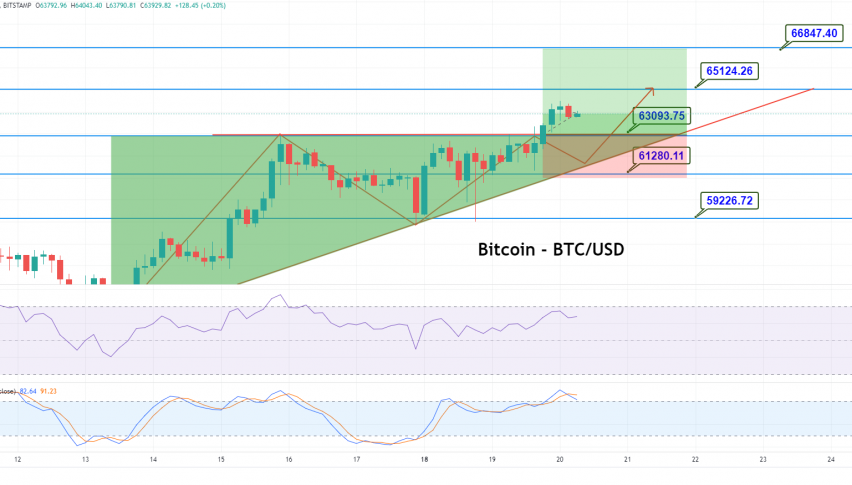 BTC Soars + 3.39%, ahead of Bitcoin ETF debuts on Wall Street

The value of the global crypto market has increased by 1.5 percent in the last 24 hours, reaching more than $2.61 trillion, amid the Bitcoin ETF. The prices of Bitcoin and Ethereum are both up by more than 2%, while the value of numerous altcoins has risen by equivalent amounts.

The first bitcoin exchange-traded fund in the United States climbed sharply on its first trading day, culminating in the push for a cryptocurrency-linked product to be listed on a significant Wall Street exchange, which has persisted for nearly a decade, finally being fulfilled.

The ProShares Bitcoin Strategy ETF debuted on the New York Stock Exchange after the opening bell on Tuesday. While comparable ETFs currently trade in other jurisdictions, the listing in the United States — the world’s largest equities market — is a critical litmus test as to whether mainstream investors are willing to include cryptocurrencies in their portfolios, alongside stocks, bonds and other traditional assets.

According to Bloomberg data, trading in the ProShares fund was brisk in New York, with more than 24 million shares changing hands, to the value of about $1 billion. The fund closed 4.7 percent higher, with $570 million in assets at the end of its first trading day, making it the second-most highly traded new ETF on record.

Bitcoin has recovered, coming close to its all-time high again, fueled in part by optimism that Bitcoin ETFs will bring fresh money into the digital asset market. On Tuesday, the most actively traded cryptocurrency surpassed $64,000, having more than doubled from a low point during a summer sell-off.

For the past eight years, ETF providers have been lobbying to try to get the Securities and Exchange Commission to enable these sorts of vehicles to trade on national stock exchanges. However, the top US securities regulator was hesitant to give the go-ahead, due to the high volatility of the asset class and broader industry concerns. It did not react to an inquiry about the matter.

Eric Balchunas (Senior ETF Analyst for @Bloomberg.) tweets and shared the ranking and opening day turn-over for the Bitcoin ETF. It was ranked Number 2 on its first day.

“If we don’t exclude ETFs where their Day One volume was literally one pre-planned giant investor or BYOA (not natural), it still ranks #2 overall. Here’s that list. The reason some of these shouldn’t be included IMO is they don’t really represent grassroots interest.”

On Wednesday, trading in the BTC/USD is sharply bullish at the 63,963 level. On the 4-hour timeframe, the BTC/USD has violated the ascending triangle pattern at the 62,959 level. Now, this level is likely to act as a support for the BTC/USD. Moreover, Bitcoin’s immediate support prevails at the 62,959 level. A break below this could lead the bitcoin price towards 62,100 and 61,175.

On the higher side, the major resistance holds at around the 65,125 level. A breakout at this level could extend the buying trend until the 66,847 level. The RSI and stochastic both support a solid upward trend in Bitcoin. Moreover, the violation of the ascending triangle pattern also underpins the BTC/USD prices. Thus, let’s consider staying bullish above the 63,093 level. Good luck!

Bitcoin Overtakes PayPal in Transaction Volume. Mastercard Next?
1 week ago