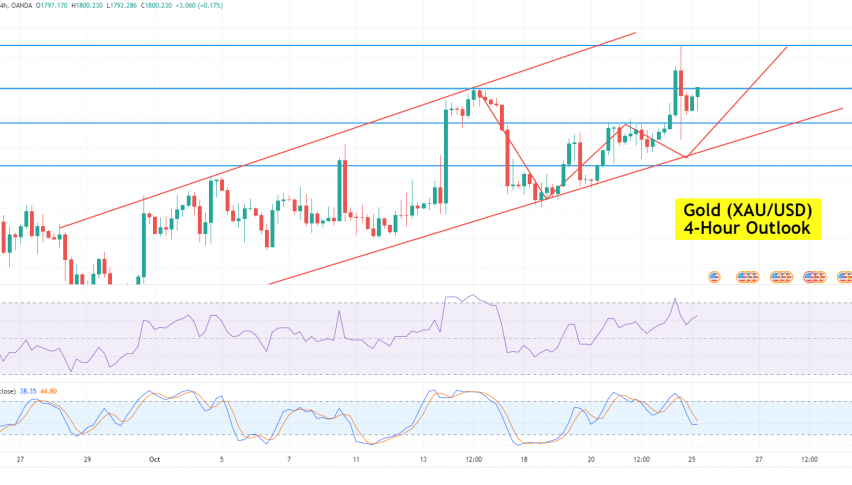 The Gold price forecast remains bullish above the 1,798 level on Monday. On Friday, it closed at $1,796.30, after reaching a high of $1,815.50, and a low of $1,83.40. The gold prices rose to their highest level since September 7, owing to a weak US dollar and falling US Treasury Yields. It appears that the weaker US dollar, along with rising inflationary pressures, is supporting the safe-haven appeal of gold, pushing its price to its highest level in five weeks. Gold managed to secure another bullish week, as the dollar continued to decline, amid expectations of high inflation.

The US Dollar Index, which measures the value of the greenback against a basket of six major currencies, dropped to 93.54 on Friday, weighing on the US dollar. The US Treasury Yields snapped a six-day bullish streak and fell all the way down to 1.63% on Friday, putting further downside pressure on the greenback and ultimately supporting the rising prices of the safe-haven metal.

On the data front, at 18:45 GMT, the Flash Manufacturing PMI for October came in, showing a drop to 59.2, compared to the expected 60.5. This weighed on the US dollar and added further to the gains in the precious metal. The Flash Services PMI surged to 58.2, against the forecast of 55.3, supporting the US dollar and capping any additional gains in gold. At 22:58 GMT, the Federal Budget Balance for September was released. It remained flat, in line with the expectations of -61.5B.

Mary Daly, the president of the San Francisco Federal Reserve Bank, said on Friday, that there was nothing that monetary policy could do to mitigate climate change or offset climate risks, and that the central bank does not need to incorporate those risks into its economic forecasts and longer-term outlook.

Fed Chair Jerome Powell also stated, on Friday, that the US central bank should begin withdrawing its economic support by reducing asset purchases, but that interest rates should remain unchanged for now. He said that the country was still 5 million jobs short of the level seen before the pandemic. He added that the high inflation rate was likely to decrease next year, when the pressures caused by the pandemic begin to fade.

He was hopeful that the Fed’s employment goal would reach its target next year, and that the supply constraints would eventually ease, which would allow job growth to speed up again. These remarks by the Fed chairman bolstered bullion prices, propelling them to a 5-week high on Friday.

Gold is still trading bullishly, with the current price at $1,798 per ounce. Gold is currently trading with a positive bias, just above the pivot point support mark of 1,796. The metal ended with a bullish engulfing candle over the pivot point mark, suggesting that the bullish trend is likely to continue.

Furthermore, on the technical side, gold is supported by a bullish bias, as the RSI on the 4-hour timeframe remains above 50. Immediate support for gold is at 1,796; below this, the next levels of support are at 1,782 and 1,778.
On the optimistic side, the next resistance level for the precious metal remains at 1,809, and a breach of this level would expose gold to 1,827. There is a bullish bias over 1,796 and vice versa. Good luck!