GBPUSD
In the Asian session, the GBP/USD pair is lingering around the immediate hurdle of 1.1900. Despite a positive market sentiment, Cable is fighting to stay above the aforementioned resistance. The pair’s euphoria has yet to dissipate, as the US dollar index (DXY) is under heavy selling pressure due to a decrease in safe-haven attractiveness.

The powerful DYX is bidding around round-level support of 107.00 and is projected to target Monday’s low of 106.88.
The DXY has been volatile due to rising apprehension ahead of the release of the Federal Open Market Committee (FOMC) minutes.

Meanwhile, the yield on US government bonds has fallen below 3.76%, indicating that the Federal Reserve’s rate hike pace is slowing.

According to a Goldman Sachs analysis, long-term US yields will continue at 4% or higher through the end of 2024, as reported by Bloomberg.
The argument is that the Fed disregards economic shrinkage in its fight against multi-decade-high inflation. According to the investment bank, there will be no recession in the United States in 2023, and inflation will continue above the target.

Aside from the FOMC minutes, investors will be watching Wednesday’s durable goods orders report. The consumer demand indicator is predicted to show a constant 0.4% increase.
This might jeopardize the Fed’s objectives to reduce consumer spending because it is the only strategy that can cause inflationary pressures to ease. 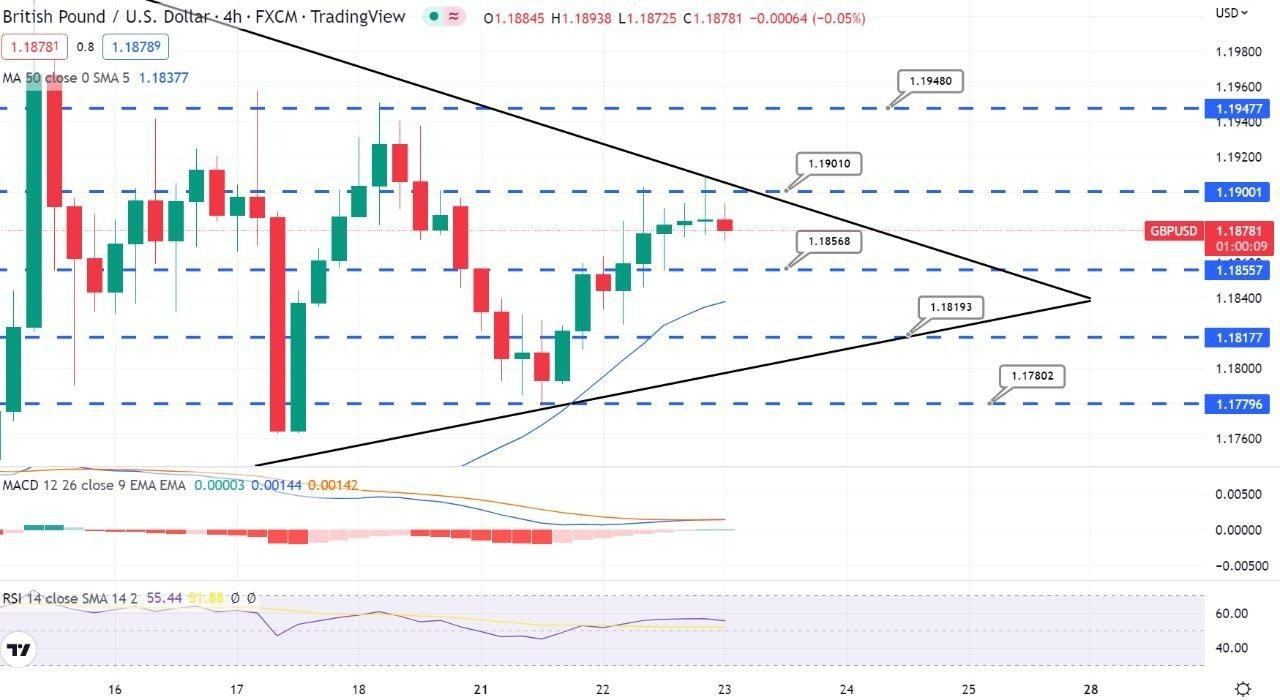 Since the morning, the GBPUSD pair has shown weak trades, with stochastics now beginning to overlap negatively, supporting the continuation of the expected bearish trend scenario for today.
Following the breakout of the 1.1760 resistance level, which is now acting as a support, the GBP/USD is holding at $1.1875.

On the upside, the GBP/USD is encountering immediate resistance at $1.1900, and a break of this level could expose the Sterling to the $1.1945 area. The trading range for today is expected to be between 1.1750 support and 1.1920 resistance.

The projected trend for today is bearish.

Gold Price Forecast: Will XAU/USD Break $1,900 After US NFP With Fed Rate Pause Rum
8 hours ago