The First Month After the Brexit Vote – July 2016 Monthly Review

This month was the first after the surprising Brexit vote at the end of June. The environment in the forex market and in financial markets, in general, has now changed so we have to adapt to the way we see the charts and trade. Here, our team adapted pretty quickly to the new changes and closed the month with a nice 483 pip profit.

The forex pairs are behaving differently, with the Yen strengthening further and fighting every measure the BOJ (Bank of Japan) takes. So, we suggest that you take a look at the broader picture as well as the price action to get a feeling of the new market behaviour.

At least the government was formed in the UK and none of the Bori-ahem… basket cases that led to Brexit took the post of Prime Minister. There was some action from the central banks as well as a premature data release from the UK to start visualizing the impact of Brexit, and we´ll cover these events further down. 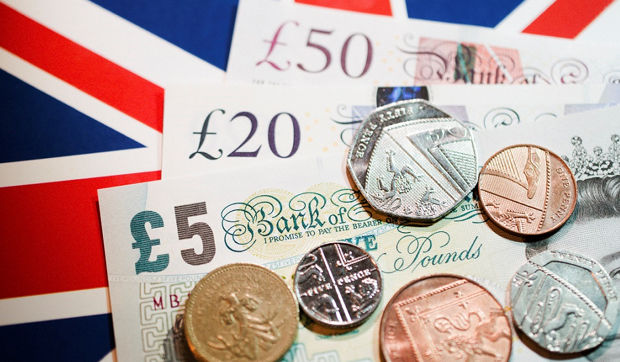 The volatility was immense in first two days after the Brexit vote, and this coincided with the last two trading days of the month. But, at least it was easy to read the price action and we had two long-term winning forex signals in EUR/USD and GBP/USD worth more than 400 pips. This month we knew the price action was going to be unpredictable.

The forex market was indeed fearful, because of all the uncertainty following Brexit. Not even politicians knew what to make of it and the chain of events that would unfold. The first two weeks were a total chaos; Brexit was questioned whether it would really happen, and then the market couldn´t figure out how all this would translate into forex.

And, it still can´t so we decided that we would adopt a short-term trading strategy. That´s the reason we didn´t have a long-term forex signal this week. All of our forex signals have been short term, trying to pick up a few pips here and there whenever an opportunity appeared. It worked well and we made 483 pips this month, although it hasn´t been easy. Trading forex is never easy but, particularly during times of uncertainty, it gets harder.

We also tried to be extra cautious with the short-term forex signals, so the total number was 64, which is below our long-term average. But at 77% the winning ratio looks pretty good, though. That´s the case with a low number of forex signals, you minimize the losses. There was one good opportunity for a long-term buy forex signal in USD/JPY when this pair was around the 100 level. It shot up about 700 pips after BOJ comments, but with the way the things have been going recently you can´t trust and support/resistance levels or anything else. As it turns out, this pair is near the 100 level again now, so… there you go. Nonetheless, we´re just happy with our 483 pip profit.

When we entered July, it felt like the doomsday had just happened and no one knew what was to come next. At very best, if felt like a new world order had begun and people didn´t know what to make of the currencies and how they would all be affected by Brexit. This was even more by the uncertainty that followed the British politics in the first two weeks.

But all the Brexit campaigners withdrew from the race for the chair of the Prime Minister and Theresa May was left unchallenged. She was an anti-Brexit campaigner but she promised to respect the people´s vote and she even took Boris Johnson on board as the foreign minister. Britain has already started trade negotiations with India and China and is trying to establish new relations with the EU member states.

As we said above, after the first panic move in the last two days of June, traders didn´t know what to make of Brexit and EUR/USD has been undecided, going up and down in a 200 pip range while GBP/USD traded in a several hundred pip range in July. The biggest mover this month was the Japanese Yen. The BOJ, Prime Minister, and ex-FED chairman Bernanke meet in the beginning of July and the forex market assumed that helicopter money was coming, so USD/JPY shot up more than 700 pips in the next two weeks. Then, we heard a rumour about the stimulus plan being a quarter of what it was first promised and USD/JPY fell about 250 pips. The BOJ revealed their new stimulus package on the last Thursday of the month. It didn´t meet the market expectations and, as a result, the demand for the Yen increased.

But a day before the BOJ, the FED had already published their statement and there were some hawkish tones in it. The rate hike odds for September and December increased. But, a day later the first reading of the Q2 US GDP numbers was a total disappointment. It was supposed to be 2.6% but the numbers came out at 1.2%. This was the first estimate (not always exact), just take a look at the first estimate for the Q1, yet, the USD got kicked again.

The UK construction data for June, which was released in the beginning of this month, showed that this sector contracted in June. Maybe the pre-Brexit anxiety had an impact on the large building companies because the rest of the data was sort of mixed and the economy mainly in expansion. That was for June, before Brexit happened, because ‘Markit’ released an unusual survey in the last week of this month, showing that the manufacturing and, more importantly, the service sector slipped into contraction. The service sector makes up for about ¾ of the UK economy and it´s been the best performing since the 2008 crisis, so if it shrinks then the whole British economy will be in trouble. For the rest of the Globe, the Chinese economy has improved, diminishing the fears global that started in February. The economic data has shown that the US economy has really picked up the pace in the last 2-3 months, but the Q2 GDP released in the last trading day of the month came out less than half of what was expected.

USD/JPY has been on a rollercoaster this month. It was near the lows around 100 at the beginning of month among risk aversion after the Brexit vote last month. Then, Abe combined with Kuroda and Bernanke made the forex market believe that something big was coming. But, the market assumptions based on assumptions don´t usually work. So, the BOJ came out at the end of the month and obviously disappointed the expectations. As we can see on the daily chart the 50 moving average provided support and USD/JPY plunged nearly 400 pips, forming a very bearish candle. On the weekly forex chart, the price formed a pretty bullish candle two weeks ago but the 100 smooth moving average (in red) which used to provide support has now turned into resistance and stopped this pair from moving up. So, the only way to go was down, which indeed happened in the last week. 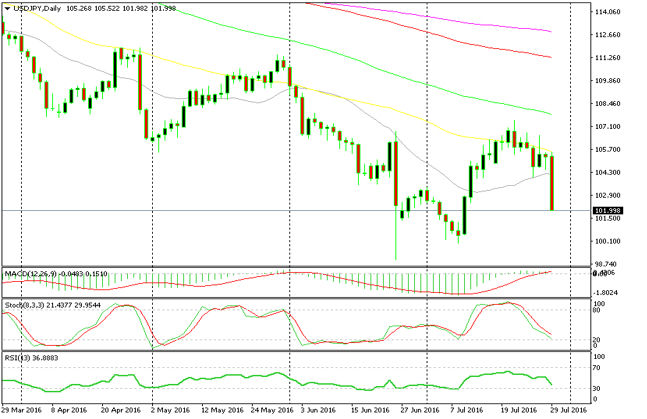 The downtrend resumed after the retrace up 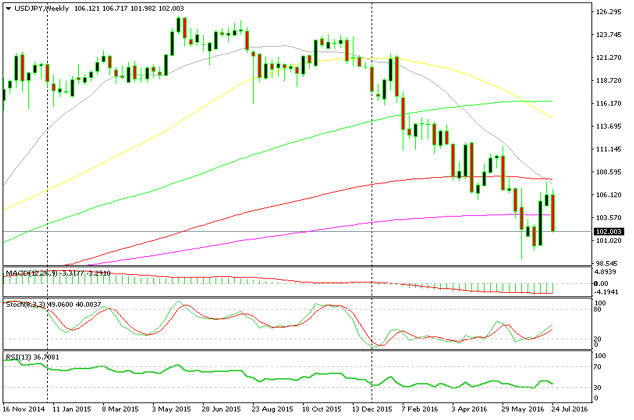 The 100 moving average has turned into resistance now

EUR/USD opened below the 100 smooth moving average – in red on the daily chart – and slowly moved down to 1.0950 which is above the low after the Brexit referendum at 1.09. That was a sign that the downside was limited, because if the recent downtrend was to continue it would have to break 1.09. The stochastic indicator reached the oversold level at the beginning of the first week and it started moving up. Then, the FED statement on Wednesday and the miss in the GDP numbers on Friday encouraged the EUR/USD bulls and the move up picked up pace. We´re now at the 100 MA, in red, which has provided resistance twice before this month. Also, the stochastic has just reached overbought levels so perhaps this upward move will end up in this area. 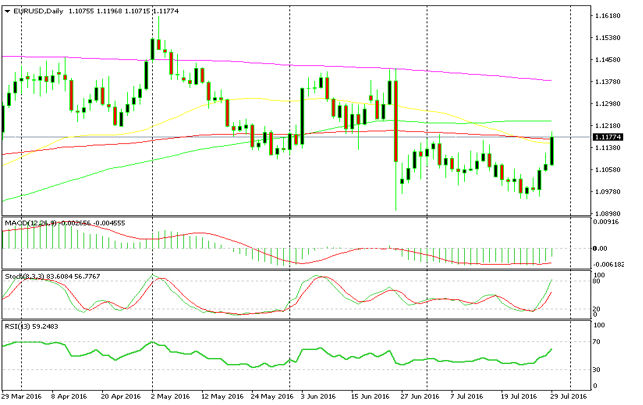 The stochastic is overbought and the 100 MA is providing resistance 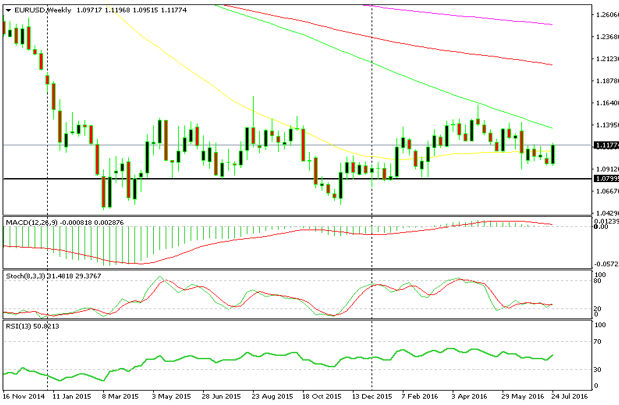 If the downtrend is to resume, the 1.09 level has to be broken and then 1.08 is the next target

This was another unusual week because it started with the market´s attention totally on the Brexit referendum and ended up with the US GDP numbers taking the spotlight. There were other important events as well, such as initial market excitement by the BOJ and Bernanke and the bubble pop. The FED were also in the picture this month, when they delivered a mildly hawkish statement, only to be proven wrong two days later. The premature UK PMI numbers for July were also very disappointing. Next month, every forex trader will be eager to see if the downtrend of the UK economy after Brexit will continue and whether the first reading of the US Q2 GDP was correct. We made some nice pips, so we hope we continue with the same performance next month.