Wait a minute, is that the JPY diving so fast? - Forex News by FX Leaders

Wait a minute, is that the JPY diving so fast?

Look guys, something is falling from the sky. IS it a plane? Is it a bird? No, it´s the Japanese Yen. The once mighty Yen is quickly diving from the top. The JPY has been market´s favourite currency to buy so far this year. The Bank of Japan introduced negative rates earlier this year while together with the Japanese government promised to increase the monetary and economic stimulus.

It means more cash will be available in the market, which will oil the Japanese economy and help revive it. But, more Yen circulating around means that the price of it will fall. As we know, money is like any other good, the more of it around the cheaper it becomes.

Even so, the Yen has been well bid throughout the year. It has massively gained across the board with USD/JPY declining more than 25 pips from the top. But now we see that the JPY is losing ground fast. What´s going on?

After having a quick shuffle through the economic news websites, I see that the BOJ guys are trying to have another go at the market. Whenever there is any little uncertainty in the forex market, the traders  go rushing towards the Yen as a safe haven currency. This has happened quite often this year, hence USD/JPY is 20 cents lower.

But now it seems like the BOJ is introducing another weapon, or better say a bigger weapon with higher firepower. The BOJ guys are calling for further monetary easing and they´re ready to dive deeper into the negative rate territory. The BOJ interest rates are -0.10% right now, but they are eyeing the ECB and the SNB who have lower rates. 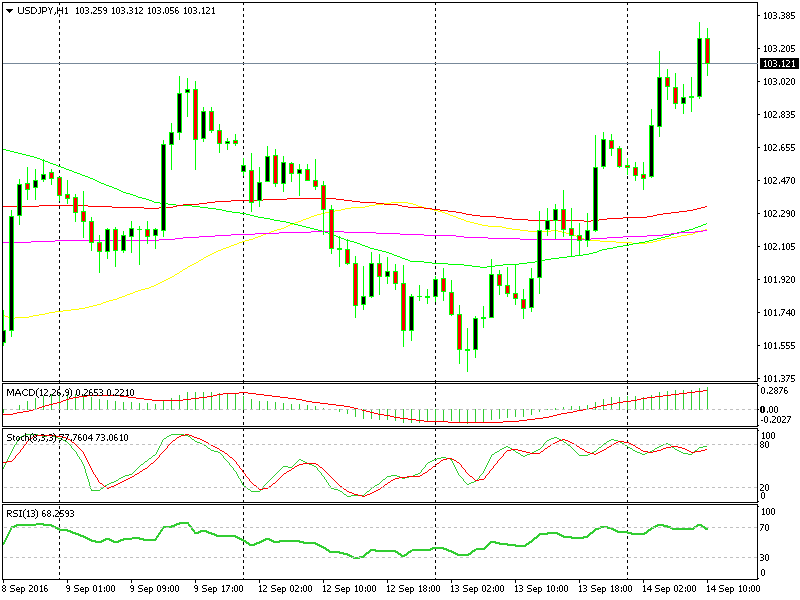 The move higher has been relentless since yesterday evening

This is obviously negative for the Yen, so for now it´s buy the dips for USD/JPY. That must be the strategy until this move fades away. The forex market might finally take seriously the BOJ, which would restart the JPY long-term downtrend. But I´m not going all in on this move. We have seen USD/JPY jump a few cents after every BOJ announcement only to reverse a few days later and fall even harder. So, I will evaluate the situation in this forex pair as it goes.