It’s the last trading day of a week and I'm sure you are excited to plan your trading setups. Let me help you out by sharing insights on the market updates and potential trade opportunities in the market.

First, let's recall the previous report on Gold & Silver shared yesterday. As suggested in the report, the bullion perfectly achieved the recommended targets and we secured an easy 110 green pips in the early trading sessions.

Yesterday, the bullion continued to trade bearish despite the release of unfavorable economic figures from the U.S, including unemployment claims and new home sales. The U.S department of labor reported that the jobless claims were 259,000, with an increase of 22,000 from the preceding week. The previous week's level was updated upwards by 3,000 from 234,000 to 237,000. Besides that, the investor sentiment turned out to be more optimistic as the President, Donald Trump, provided more details on his policies. Not only that, he also signed two executive regulations on Tuesday to initiate the construction of the Keystone XL and Dakota Access oil pipelines. 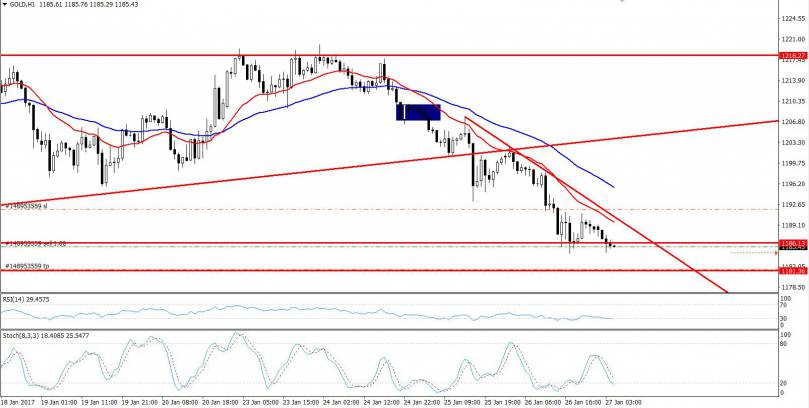 Now let's look at the technical's of Gold. Yesterday, it closed below a strong resistance level of $1195. Meanwhile, the Gold has formed three black crows in the daily timeframe, fueling bearish sentiment. However, we can't ignore the fact that according to RSI value, it's trading near to oversold territory. So, we can expect a retracement soon.

Besides that, in the daily timeframe, the yellow metal is likely to head lower to complete the 38.2% Fibonacci retracement at $1180 level. On that note, I will recommend investors to have sell positions only below $1187, aiming the initial target of $1181. However, the breakage below this level can push the Gold towards next target level of $1176.

Silver, the Gold correlated metal, is also trading lower at 16.727, falling nearly -0.123 points and -0.73% in the Asian trading session. It's maintaining bearish for a consecutive 3 trading days, falling more than 500 pips in the last week of Jan 2017. 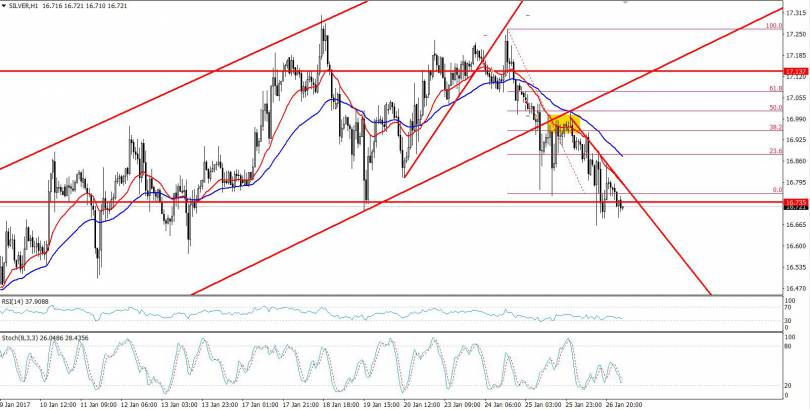 Well, just like the Gold, it has also closed below the 20 & 50 periods EMA's along with the RSI, that's also holding below 50, confirming the bearish sentiment for Silver. Based upon the analysis, I would recommend traders to closely monitor the crucial level of $16.68. The sell positions are preferred only below $16.68, having a take profit at $16.3.

Check out our free forex signals
Follow the top economic events on FX Leaders economic calendar
Trade better, discover more Forex Trading Strategies
Related Articles
USD Risk Tilted to the Upside, If Powell Disappoints Today
Markets are all pricing in a dovish FED today after raising rates by 25 bps, but Powell might repeat December's comments which will be hawki
1 hour ago