Hello, all FXML followers. We hope that you followed all our forex signals this week and made some green pips. We had yet another profitable week – which makes it the third one in a row!

We made 166 pips this week, all from short-term forex signals. We also presented you guys with a long-term trading idea. Yes, it was USD/JPY which we were watching, but we missed the entry. The price crawled nearly 300 pips from the lows during the week, and if you utilized that opportunity – well done – and we hope that you enjoyed your gain.

Looking at the wider economic picture, Donald Trump is now officially the president of the United States. He's already started to turn his words into action. Many of his voters probably thought that Trump´s promises during the campaign were a bit farfetched, while his opponents hoped that those promises were just propaganda.

Well, we've seen some of the bigger promises turn into real policies in the first week of his presidency already. How well they will function remains to be seen… but it´s happening.

The market got excited and the Pound rallied but, in my opinion, this is a negative thing for the Quid, unless Brexit reverses, which is almost impossible.

The special relationship has begun

January is almost over and we're progressing quite well with our forex signals. This is the third week with over 150 pips in our forex account and, despite the first week when we got caught in the holiday market, we´re now about 400 pips better off.

That 112.50 support level in USD/JPY has been very tempting recently and it provided us with another great trading opportunity this week that would have added another 250 pips to our account, at least.

Still, we don't feel that bad about it because we passed the guilt to you all. I have pointed out this support level quite often in the last couple of weeks, and we left the decision to you. If you got it, then kudos to you, if you missed it, it's yourself you have to blame. Tough game, eh?

Anyway, those who didn't grab those pips can still enjoy the other 166 pips we made from our short-term forex signals.

We started the week on the wrong foot with our EUR/GBP signal which we opened last Friday. It hit the take profit target on Monday morning but we recovered pretty quickly.

EUR/CHF has given us many pips in the last several weeks, but this week NZD/USD turned into our milk cow. A certain support level and a couple of moving averages on the H1 NZD/USD chart were more than enough for us to make our mind up.

NZD has shown the most resilience in the past couple of weeks, so we decided to buy the dips on the H1 forex chart. This worked well; we opened three buy forex signals here and we tried our luck with a sell signal on Friday evening. All of them closed in profit, giving us 100 pips.

We opened 13 forex signals this week in total, two of which hit stop loss while the rest closed in profit. That gives us a great 85:15 win/loss ratio.

Trump was the big event this week, but let's start with Brexit first. The UK High Court ruled against the British PM Theresa May in December which practically sends Brexit to the parliament before Article 50 is triggered.

So, this week's Supreme Court decision was sort of expected, yet GBP traders saw this as a positive thing for the Pound. It´s because of this that the Quid was the best performing currency of the week, with the GBP/USD rallied about 300 pips.

But as I said in one of our daily updates, this is negative for the Pound and I bet we´ll see the fire soon. This will only delay Brexit, which will increase the uncertainty among market participants but most importantly in the investment field. The longer it stays in the parliament, the later Brexit happens and the greater the uncertainty. So, in the long term, this may be a big minus for the Pound.

Crossing over the Pond, President Trump has already started making his moves the way he´s used to. Actually, this first week seems as vehement as his campaign.

He has taken a number of decisions and made a number of promises, like the reviving of the Keystone XL and Dakota Access Pipelines, building the “Great Mexican” wall, “banning” Muslims on airports (which has now been overruled by a US judge), investigating the US voting system, strengthening relations with Britain, but most importantly introducing a major border tax on incoming goods, cancelling NAFTA (North America Trade Agreement), cutting regulations for businesses by 75%, pulling USA out of the TPP (Trans-Pacific Partnership) and condemning China and Japan for currency manipulation.

I totally agree with the last decision/comment, but I'm sure I have left some of them out.

Most of them might be symbolic, yet, the market doesn´t really like it. The Buck had one of the best runs in years in the last two months of last year, after Trump won the elections because people assumed that the US system would refrain him and a big fiscal stimulus plan was coming.

No one knows how far Trump will go, but the market is feeling anxious. It doesn´t want either too much or too little of him.

Right now, we're going through a period where we're seeing too much Trump and the Dollar is suffering because of this. This is a good time to look for USD dips in major forex pairs for some long term trades.

The mighty Draghster started the week on Monday with one of his speeches, but this is no time for central bankers. Politics is ruling the financial markets now.

On Tuesday, we saw yet another good round of data from Europe. The Eurozone manufacturing and service sectors beat expectations, but the US home sales missed them.

Wednesday was mainly a negative day, with Australian inflation report CPI (consumer price index) coming out at 2 points below the estimates and the German business climate worsening compared to last month. The only positive piece of data came from New Zealand when the better inflation numbers gave us 25 pips from our NZD/USD signal.

The rest of the week wasn't much better either, which is unusual considering the recent months. The US durable goods orders for December fell by 0.4%, which affected the Q4 advance GDP that missed expectations by 2 points.

GBP/USD has managed to put an impressive rally in the last two weeks because of latest Brexit revealing. The price moved above the 20 SMA in grey on the weekly forex chart for the first time since the Brexit referendum.

This is a bullish signal, but not in an abnormal trading environment like this. I´ve said it a couple of times this week that I´m looking to sell this forex pair and fade this rally. The 1.2780-28 level looks like the perfect spot because it has been solid support and turned into solid resistance after being broken. 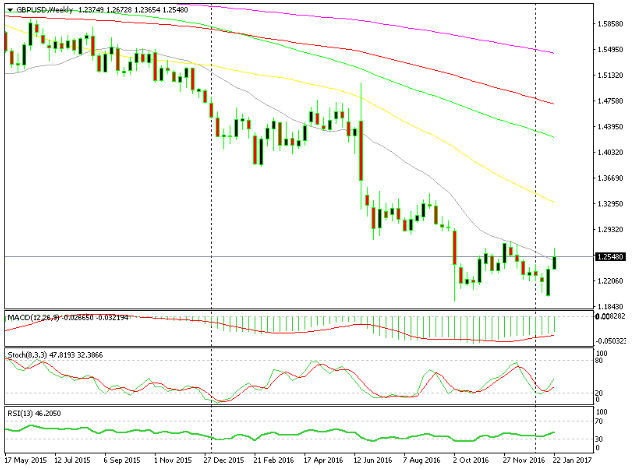 We closed above the 20 SMA in grey since last summer

But, the weekly chart is not overbought yet. Stochastic and RSI are somewhere in the middle of the range and heading up. We still have to wait until next week´s candlestick starts, because both technical indicators will be a bit higher by that time since this week's gains are not reflected yet on them. 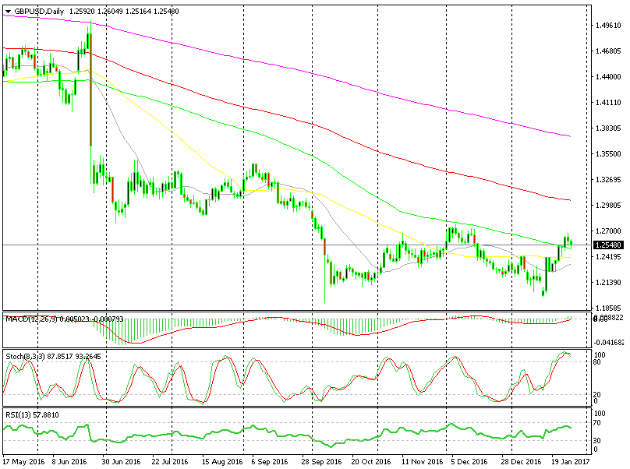 The daily chart, on the other hand, is screaming ‘Sell!’. Stochastic has reached the ceiling while RSI is almost overbought. But, the 100 SMA in green is providing some sort of support now, so unless that goes the GBP/USD sellers must be careful.

The 1.30 round level looks enticing as well; the 100 smooth MA in red on the daily GBP/USD chart is just getting there and by the time the price gets up there it would have done so. But, we still have to make our decision. Sell now, wait for 1.28 or wait even further for 1.30.

We've heard a lot about Trump and his intentions from more than a year and this week was the time to see him on the job. He entered office last Friday and already took a number of questionable decisions.

The market looks a bit scared. Who knows how far things might get? The Buck has suffered as a result… but not us. We closed another successful week, and we're well set for January. Let´s hope we push our profits further in the last two trading days.

GBP/USD Enters Overbought Zone - Why 1.2500 Could Drive Sell-off
4 days ago