This week we finally got a break from trading on Trump's comments. Although, the new administration is pushing further to abandon trade agreements and the Commerce Secretary Ross said on Friday that, in a few weeks, the US will give its 90-day pullout notice from NAFTA (North American Free Trade Agreement).

But, the market seems to be getting used to these sorts of comments now, or is it? We´ll have to wait for a few more weeks to see if panic kicks in again.

The single currency was at the center of attention this week. The market is getting more and more interested in the French elections. The Euro rallied for about 100 pips when a few polls showed the anti-EU candidate Le Penn had slipped into second place for the first round.

Besides that, FMN is joining in for a Greek bailout, so that´s another piece of good news for the Euro bulls. But, the star of the week was the ECB and, of course, the man in charge of the job Mario Draghi. The ECB statement was sort of hawkish, but the master smoothed it down once again with his silver tongue.

Nonetheless, the market smelled something was cooking at the ECB headquarters and the Euro closed the week near the highs. And wouldn’t you know, the next day Bloomberg reported a leak from those headquarters, which implies a rate hike soon. 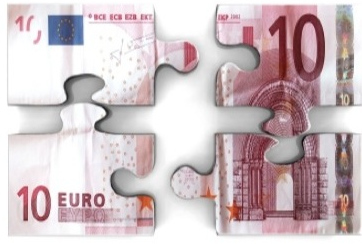 The pieces are falling in place, but not just yet

This week was sort of exciting for us since we only had one losing signal and made a nice profit. We took a break from trading politics at last, but other factors are always present in forex such as economic data and the Central Banks.

Wait, I forgot the French election polls, but even these didn't affect our trading this week, so let's leave them out. Although speaking of the economic data, the great US employment report on Wednesday was the reason for our only losing signal this week and the US earnings numbers were the reason that our AUD/USD signal nearly reached SL.

Yet, this forex pair brought most of the pips home for us this week. We had two winning forex signals here, both of them sell signals. That´s because the Aussie has been the weakest of the major currencies, mainly because of the miss in the Chinese inflation data CPI (inflation price index).

We also had some satisfactory results with EUR/CHF this week. After weeks of sliding down step by step, the SNB finally decided to enter the market, at least those were the rumors. So, that´s more than the forex market bargained for, and this pair is now about 160 pips higher compared to 7-8 trading days ago.

We had two short-term winning forex signals in this pair and another long-term signal which is still open.  That signal is about 50 pips in profit now, but leaving that aside we're 80 pips up for the week, only forex signals, though.

So, Donald Trump has been around for awhile now as president of the US and it seems like the market is slowly getting used to him and his comments/decisions. Or perhaps it´s just tired of trading every comment and it's taking a relaxing nap to gear up for the next 4-8 years.

As we mentioned last week, the French are leaving no empty seats. Le Penn has been leading the French presidential election polls since the beginning (although very slightly) for the first round, and so Macron´s advancement this week gave the Euro a much-needed boost.

By the end of the week, another positive event for the sake of the EU unfolded; the dead-and-buried-candidate Fillon got a hand from some French hot shot who´s going to manage his campaign as well as sponsor him.

Another hope arrived for the Euro this week, but this time it was the old-fashioned Central Bank move. There wasn't anything particularly hawkish in ECB statement on Thursday but you couldn't find anything dovish either, apart from the core inflation (core CPI) which has remained almost stagnant recently.

Given the fact that we are in an extremely expansionary period right now, a null statement gets automatically translated as hawkish. If there´s no negative elements in the Eurozone economy, then why keep a loose monetary policy?

That gave the Euro a 50 pip boost on Thursday, despite Draghi trying to talk the enthusiasm down, but on Friday a leak from the ECB headquarters about a possible interest rate hike sent Euro pairs about 100 pips higher.

No one knows when the ECB will start tightening the monetary policy, but I don't think this counts as a rate hike, unless it's at least 50 bps (basis points), because the ECB deposit rates now stand at -0.40%.

Anyway, there´s still a long way to go until then, but as I Mentioned about a month ago, we must seriously start considering building up the longs on Euro pairs and EUR/GBP is the favourite, in my opinion.

We´ve seen quite a few impressive pieces of economic data in the last several months, which have increased the optimism for the whole global economy, but as I said on Friday morning, this week looked like a retrace period that followed a strong uptrend.

The economic data was mainly negative this week, and Tuesday was a good example with German factory orders declined by -7.4% and US optimism and consumer credit missing the expectations.

On Wednesday, the US ADP employment report was impressive but that was about it. The massive decline in the yearly Chinese inflation numbers (CPI) from 2.5% to 0.8% on Thursday ruined the mood for everyone. At least it gave us a winning signal in AUD/USD.

On Friday, the French manufacturing production lost 0.3% of its shine while the UK industrial production declined by 0.9%. But, the market is totally focused on the money right now and the miss in the US average earnings was irrespective of the job gains and the 0.1% decline in the unemployment numbers.

We haven't taken a look at the long-term EUR/CHF chart for quite some time and we also have a long-term signal there, so I think it's time we took a look at the bigger technical picture.

All the moving averages which have been harassing us at the top side for a few weeks are now trailing in the dust. We have convincingly moved above all of them this week, although the stochastic and RSI indicators are overbought on the H4 chart. 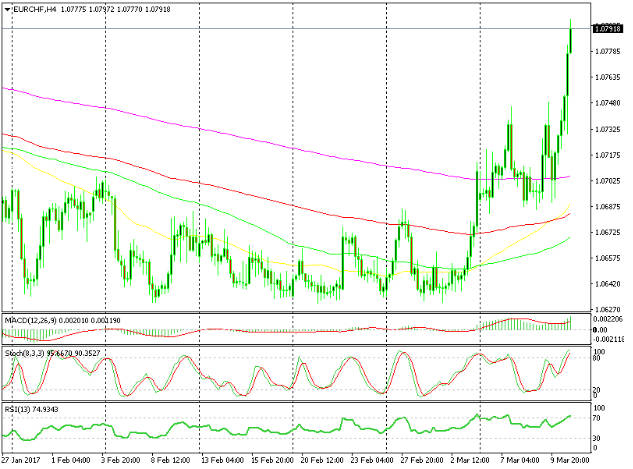 The road is clear of all moving averages

We can see on the chart above that that the price has reversed back down every time these two technical indicators had reached the oversold area. But, this time is a bit different because the move is too strong and we're already above the MAs, as we said. 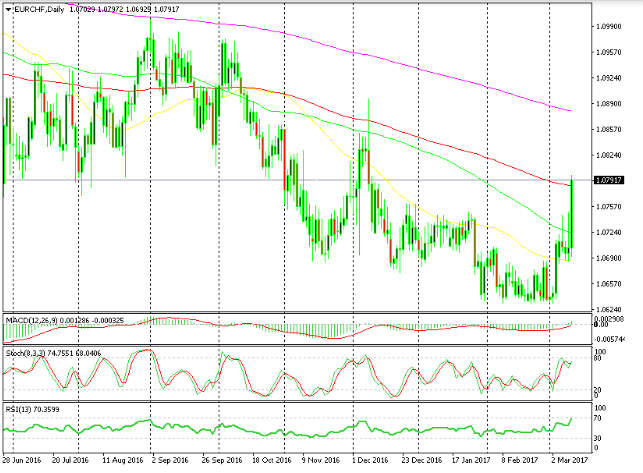 The price finally moved above the 100 SMA

The daily chart, on the other hand, is strongly pointing up. We have moved and closed above the 100 SMA in green for the first time in about 6 months, which is a strong bullish signal. We're well in profit with that signal, but there´s a lot of room left to the upside, and thus we're letting it run.

We closed the first week of March with a nice profit which is a good start. Although we got a hand from Trump this week since he decided to give the forex market a break from all that bullying.

Next week will be pretty exciting I guess. Draghi will start the week on Monday, so we'll hear what he has to say about the interest rate hike leak. The FED meeting will definitely be a big one to watch out for. Probably a rate hike might come as soon as next Wednesday… who knows? I heard Dutch elections are due next week, but I haven't seen anything yet.