This year has been extremely volatile so far, but in the last couple of weeks, we have seen the forex market go through a quiet period. Maybe the market is expecting something big (remember Article 50 is on the 29th) or perhaps it just stopped for a breather.

One thing to notice this week, though, was the effect that the economic data had on the market. We´re used now to seeing the forex market totally ignore the economic reports (and even the central banks sometimes)… it's as though we´re back in the ‘60s.

But on Thursday and Friday, the market showed some signs of life after the economic releases. That´s good for forex traders because it makes trading a bit easier for us; the market becomes a bit more predictable.

So, it was a relatively quiet week, but there was also a scent of caution in the air. The economic data was mostly positive and the political risks in Europe are diminishing, but the risk-off sentiment prevailed, particularly in the last couple of days. That pushed USD/JPY below the strong 111.50 support level, which throws off the buyers´ idea for a long position there. 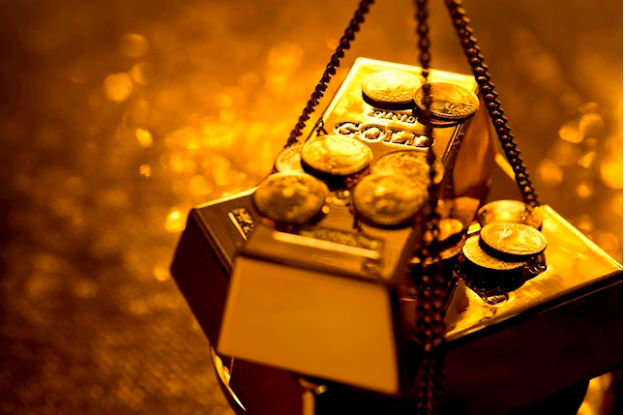 Gold and the Yen are the two main beneficiaries when risk appetite is low, comparing their charts

This week was lighter work for forex traders since the volatility diminished and politics stayed out of the way. So, the market was a bit easier to read.

The number of forex signals was lower, but we also gave a few trade ideas on our market updates, which actually went pretty well. We should have taken them, but at least it is consoling to know that some of you have benefited.

We opened 8 forex signals this week, 5 of them closed in profit while 1 hit SL. The only losing signal was in GBP/USD. This pair has become very unpredictable, so we´re planning to shift to long-term signals only for the next decade or so. But, we got one signal back at the end of the week though and ended the week well in profit.

This week started pretty well for the Euro; the pro-EU French presidential candidate Macron took overtook Le Penn in the first round polls and it got better as he extended the lead. I guess Monday´s debate went in favour of Macron.

That wasn´t all for the Euro, though, as the Eurozone economic data showed further improvement, which increases the pressure on the ECB to raise the interest rates.

Overall, it´s been a quiet week with a 100 pip range in most forex majors. But, there was a sense of uncertainty as well, hanging above our heads like a dark cloud.

The run for safety is most visible on JPY pairs, so this is the reason USD/JPY lost about 200 pips for this very same reason this week. I´m feeling ever more tempted to open a long-term forex signal in this pair, but there are too many risks for the financial markets right now, so I might wait for a few more trading session to see how the next few days will be, before making my decision.

We also saw the market take notice of the UK retail sales and Eurozone service and manufacturing data. The numbers were great and the respective currencies jumped. Let´s hope that the economic data has its way in the markets once again and everything turns to normal.

Another notable thing this week was the decline of the Aussie. If you watch the charts of forex majors, all major currencies gained against the Buck this week, apart from the Aussie. It might have been the RBA (Royal Bank of Australia) meeting minutes, but whatever the reason, the AUD is going to suffer a lot more when the market falls in love with the USD again. So, when it comes to signals, I´ll only be looking to sell this forex pair.

Monday was dead quiet regarding the economic data. In the early hours of Tuesday, the Australian house price index showed a 4.1% jump in the Q4 2016, but the Aussie had already started its nose dive when the RBA minutes got released.

Later that day, we saw some more positive numbers, the UK inflation release posted a substantial jump from last month, while the Canadian retail sales finally moved back to positive territory.

Wednesday was quiet as well, but on Thursday the British retail sales surprised everyone as they jumped by 1.4%. The US new home sales beat the expectations as well, so as we said, it´s been a pretty positive week.

On Friday, the US retail sales also jumped higher, but the European numbers took all the attention that day. The EU manufacturing and services PMI report showed that these two sectors are experiencing the fastest expansion in the last 5 years or so.

Looking at the daily EUR/USD chart, the seller can make a case for a long-term sell position. There are several indicators which point down; this level (1.0820-40) has provided resistance once before and three times support.

That´s only how far the daily chart allows us to see because it has been providing support and resistance for the past two years, actually.

Besides that, the stochastic and RSI are oversold, while the 100 SMA is adding strength to this level as well. 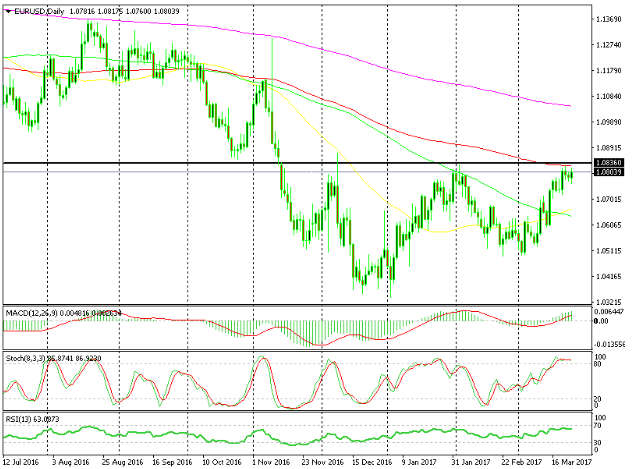 Many technical indicators point down on the daily EUR/USD chart

But, on the weekly chart, this forex pair looks to be headed up. Both technical indicators at the bottom of the chart are moving up with still some room left to run.

The 50 and 100 SMAs are also much higher, and they stand at around 1.0950 and 1.10 respectively -that´s more than 150 pips from where we are now. The dilemma is, should we short this forex pair now or wait for a better entry price higher up? 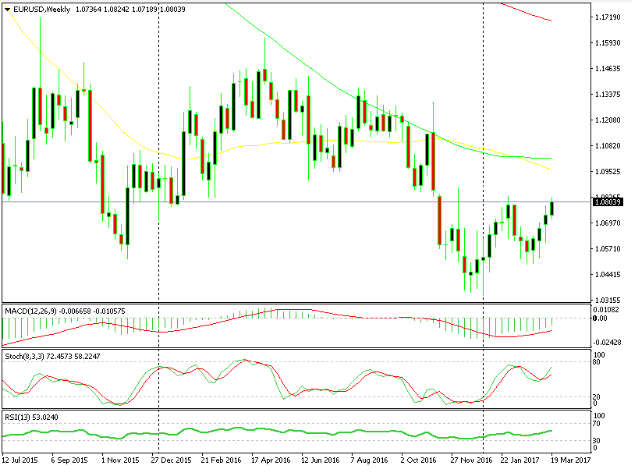 This week, we got back on track with our forex signals; we closed the week with 84 pips, although we could have done better.

It´s been a quiet week, but we expect it to change dramatically in the coming days. Brexit will officially start its engine and for two years it’ll be messy until both parties get all they can from each other.

It will be difficult and tough to predict, but it will be fun nonetheless! We posted a market update with a trade idea for this situation, so have a look at that to know our opinion about this and trade safely guys.