After a quiet Monday during the Easter Bank holiday, this week couldn’t be any different. British Prime Minister Theresa May made a surprise announcement that she is calling for a snap general election, which gave the market a proper shake after a drowsy previous week.

It was unexpected since May had previously opposed such elections, so the element of surprise made an appearance on the GBP movements which followed that day.

Brexit has been taking the toughest path possible since the referendum, so a general election in the UK couldn’t make things worse, hence the 400 pip jump in GBP and the 100 pip jump in the Euro.

French elections were in focus as well this week, but the first round – being held today – is not that important, although some forex brokers have raised their margin requirements. By the way, on Friday evening Trump tweeted that next week we will see his tax plan into action with massive cuts, so I think this will lead to a lot of volatility. 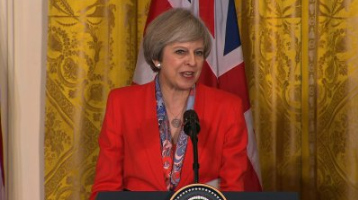 This was another week with only one losing signal, but that wasn´t really anyone´s fault on our team. The UK elections were announced, the British Pound surged about 40 pips which pulled EUR/USD 100 pips higher, and our sell signal in EUR/USD got smoked.

But apart from that, we had a quite decent run this week. We spotted two trends this week, the AUD downtrend and the GBP uptrend and had a few winning signals there, although not as many as we would have wanted.

It´s not difficult to spot trends when they have already happened, but anticipating them is quite another thing that brings you most of the pips in forex.

So, the GBP uptrend this week had already formed when we opened the buy forex signal in this pair, but the AUD/USD signals were a result of our fundamental and technical analyses.

The RBA (Royal Bank of Australia) meeting minutes on Tuesday morning were pretty dovish, which made the AUD/USD chart look like gentle dive that day, while other major currencies were gaining massively on the Buck.

So, the technical analysis pointed down as well as the fundamental analysis, and our bias towards this forex pair was bearish, which is why we only opened sell signal here. We also hold a bearish view for this forex pair next week, by the way.

We also closed the first short-term EUR/CHF signal on Thursday and opened another one below 1.07 on Friday.

Everything started pretty quietly on Monday since most markets were still closed for the Easter weekend. But it didn’t take long before we started seeing some action.

The RBA delivered dovish statement/minutes and the AUD pairs started rolling on the downside. We still tried to make use of it by opening a couple of sell forex signals in this pair.

Later that day, though, the real fireworks went off; PM May announced that UK general elections will be held on June 8th and all sorts of ideas started running through market´s mind.

In my opinion, nothing extraordinary will happen… the Brexit process will continue the way it has done so far. But there are hopes that the UK government will soften its approach for a gentler Brexit.

Although it’s the best possible outcome of these elections after what we have seen in recent times, we´ll never know for sure what might happen. The Liberal Democrats have adopted the anti-Brexit campaign for these elections and I personally know a lot of people who voted for Brexit or didn´t vote at all and have now regretted it. So who knows, the political landscape might change again (we live in strange times).

But that´s the reason the Pound surged for about 400 pips that day while Euro pairs climbed about 100-150 pips.

In France, the first round of general elections is being held today (Sunday), but the polls haven’t shown a clear favourite, yet. Well, as long as Le Penn doesn´t win, the EU is safe.

On Friday, President Trump tweeted that next week his administration will unveil the fiscal plan. There will be massive tax cuts to companies and individuals according to him, and this stoked the 50 pip decline in safe haven currencies on Friday evening.

Monday was still a holiday for the western hemisphere, but China is a world of its own. So they released the industrial production and fixed asset investment numbers, which showed a surprising jump from the previous month.

The Eurozone economy continues to expand, with the German, French, and the EU 27 service and manufacturing numbers remaining above 56 PMI points, while the current account surplus also growing to around 38 billion Euros.

But, the most important piece of data this week was the UK retail sales numbers. Retail sales declined by 1.8% in April, which put this sector back in contraction and made this year´s downtrend very real, especially after the jump in March.

As you can see on the daily forex chart, EUR/USD has been in an uptrend since early January. About a week ago, the price was right at the ascending trendline. We highlighted that as a trading opportunity and right now the price is more than 100 pips above. 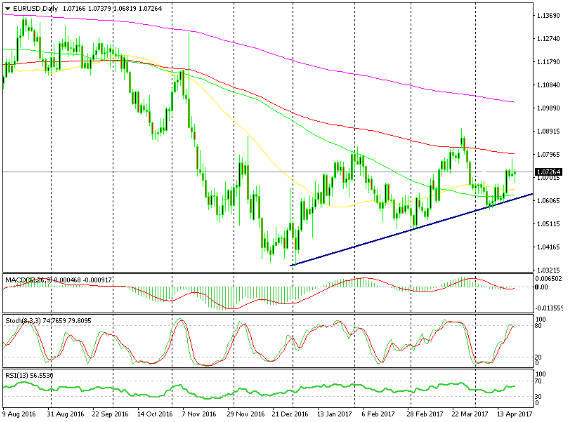 The trend line worked yet again for us this week

But, the stochastic indicator is overbought now, so this might be the end of this last leg up. I suggest that if you are in that trade, you better lock some of the profits in now.

The weekly chart is still looking up, though. The stochastic and RSI are heading up and this week´s candlestick is big, bullish, and engulfing.

So, there are contradicting signals from two timeframe charts but I don´t think it will be the technicals which will decide the fate of this pair next week. Donald Trump will (once again) drive the markets around. 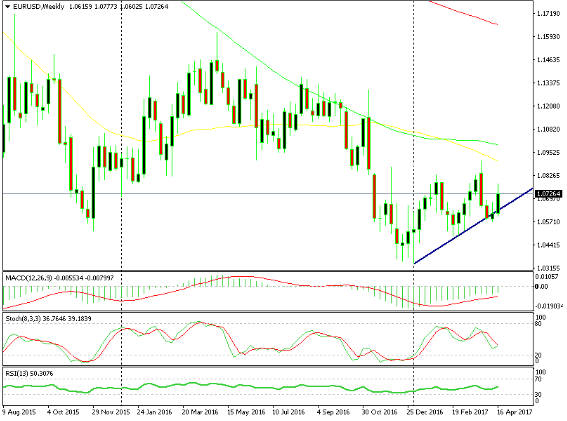 Technical indicators on the weekly chart are still pointing up

We had another good run with our forex signals this week. We only lost one signal when we got caught on the wrong side after the UK general elections were announced, while the other eight signals either closed in profit or remain open.

Next week, we expect a lot of action. Donald Trump tweeted that he´ll announce the fiscal plan which everyone has been expecting. So every leak, comment or even assumption is bound to send the forex market into chaos. It´s expected to be a volatile market and uncertainty will be high with lots of whipsaws, so we advise being extra careful while trading.

US Dollar On The Rise: A Quick Look At GBP/USD And USD/CHF Signals
23 hours ago