Last week we saw a hawkish shift in the FOMC statement and Yellen backed it up. We also saw some hawkish signs from the BOE, but had to wait for Carney´s speech this Tuesday.

But as I was anticipating, Carney poured cold water on any ideas anyone might have had about rate hikes anytime soon. Although, a day later, another member (Haldane) joined the hawkish side at the BOE. His comments were a bit unrealistic but, together with the Queen´s comments on a softer Brexit kept the Pound afloat.

A day later, the RBNZ (Royal Bank of New Zealand) kept the interest rates unchanged, but again the action came from their rhetoric, which had a hawkish tone, particularly since no one complained about the stronger NZD.

On Friday, it was the turn for the FED to close the week. FOMC member Mester warned us about higher inflation, but at the end of the interview, he said that one more rate hike would be appropriate this year. That´s not very hawkish for a hawk like him.

Draghi also sounded quite hawkish on Friday when he asked EU leaders for deeper fundamental reforms since the momentum is pretty good for the EU economy. That was backed up by Merkel just an hour later.

After having some difficulties last week, we finally got back to normal this week. In fact, we had a pretty god week. We closed it with 0 losing signals out of seven which is a 100% success rate.

Yes alright, the number of forex signals was pretty low this week, but that was mainly because the volatility was pretty low as well and it got much quieter as we headed towards the end of the week.

We made 127 pips this week from seven forex signals. We started the week pretty well with three winning forex signals on Tuesday which accounted for most of our profits, but as the week progressed and the market grew quieter, the signals lasted longer and we were forced to close some of them manually in order to reduce the exposure.

So, the profit increased but the pace got slower. We were hoping that our USD/JPY signal would hit take profit on Friday, but this forex pair traded in an extremely tight range during that day, so that signal is nowhere land now.

The BOE (Bank of England) has been delivering some confusing signals lately, which has been reflected in GBP. It can´t make up its mind whether it wants to go up and make a decisive move above 1.30 or plunge into the abyss.

Last week two more BOE members voted to hike the interest rates, but Chairman Carney said on Tuesday that “now it´s not the time to hike rates” which is contradictory. But they weren´t done, Haldane made some more even hawkish comments, which left GBP traders scratching their heads.

One thing to notice this week was the divergence in NZD and AUD. These two currencies usually converge, but after a hawkish RBNZ they started moving apart on Tuesday. By the way, we plan selling AUD/NZD, but we´re waiting for a retrace higher on the daily forex chart.

There were some mixed comments coming from FED members as well on Friday, but Mario Draghi and Merkel stole the show that day. Draghi urged EU leaders to push ahead with structural reforms, which sort of intervenes/overlaps with their power. That same day, Merkel and Macron had a long meeting and they backed Draghi´s comments, so it seems like a federal Europe is starting to take shape.

Inflation has cooled in the last 1-2 months and the Germans don’t look so worried now. Producer inflation (PPI) declined by 0.2% in Germany from last month, so that´s why Merkel and Draghi felt so confident on Friday.

In the US, unemployment claims remained unchanged but at a healthy level, while existing home sales jumped considerably from last month. That said, manufacturing and services missed on expectations on Friday.

The data coming from the Eurozone this week was sort of mixed, but I can´t say the same about the numbers coming from Canada. Inflation was supposed to remain at 1.5%, but it came at 1.3%, even after lower unemployment and better economic conditions in Canada. That puts a big question mark over the traditional economic politics/policies, but we´ll cover this issue in the coming week.

Last week we said that EUR/USD was looking bearish because stochastic was overbought and the candlestick formation pointed down.

Stochastic remains overbought and it´s heading down, but the candlestick formation is changing. The previous two candlesticks were bearish but this week´s candlestick is pretty bullish. Basically, the sellers tried the downside but in the end, the buyers took the price back up and EUR/USD closed the week where it started.

Bears tried this week and failed

So, the weekly chart is unclear right now, while the daily chart is pointing up. Stochastic is headed up and Friday´s candlestick was pretty bullish, but the 20 SMA (grey) has been providing solid support previously and now it´s turning into resistance.

If the pair is to move up the price must break the 20 SMA soon, otherwise, forex traders will think it is unbreakable and start selling. 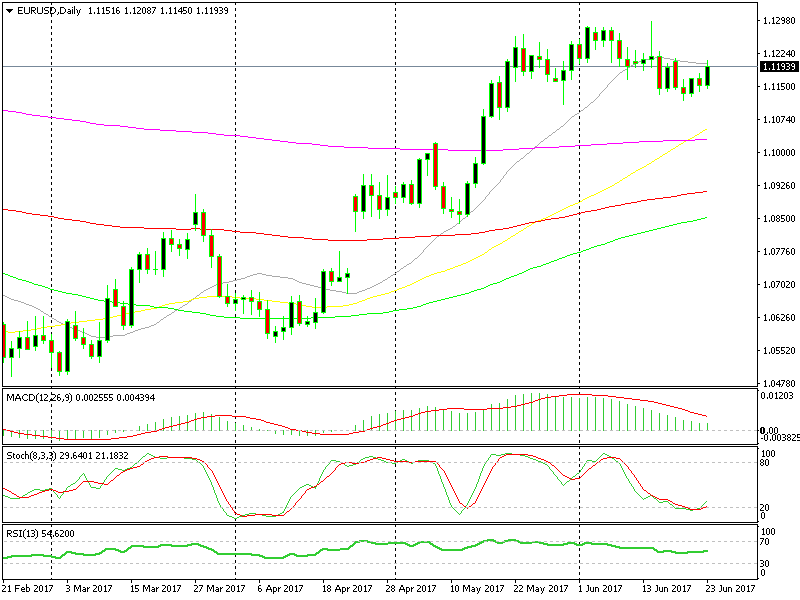 So, there was a lot of central bank talk this week which moved the markets around, but we managed to close it with quite a few pips in our forex account.

Next week, the forex market is supposed to be similar or probably more volatile because the central banks will get even more active. It starts with Mario Draghi on Monday and again on Tuesday, to be followed by BOEs Carney and Yellen on the very same day. That´s only until Tuesday, who knows how the market will end up next week?