As we mentioned yesterday, the markets are getting quiet now that August is approaching. Most forex majors are trading in tight ranges. Nevertheless, these sorts of ranges do offer some nice trading opportunities for scalpers and short term forex traders.

The signals that we opened yesterday closed in profit overnight as NZD/USD and USD/JPY took a dive. Although, this morning we saw a retrace in some of the pairs and we opened two more forex signals in USD/CAD and USD/JPY, which we explained earlier on.

The USD/CAD sell signal looks good at the moment as this forex pair is sliding lower after completing a retrace and failing to break the 50 SMA.

We can´t say the same for the USD/JPY signal though; the price crawled higher, breaking yesterday´s resistance at 111.20-30, but the 100 SMA on the hourly forex chart has come to our rescue. The price seems to have stalled there now, so fingers crossed. 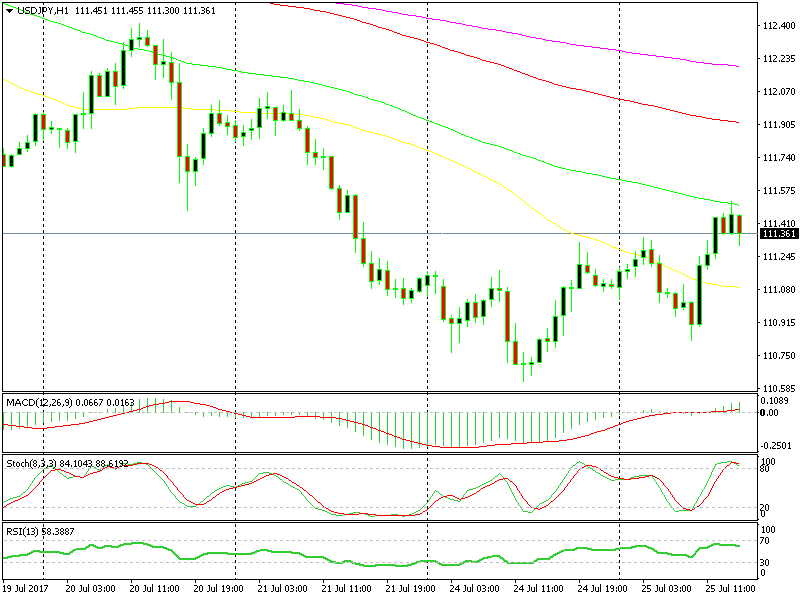 The 100 SMA seems to be working as resistance

Safe haven assets have been in demand over the last couple of weeks. Gold, which is the ultimate safe haven, gained about 50 cents (yep, that´s correct) during this time. But today we are seeing some weakness in gold. We´ll post a specific update about gold later on today.

I´m still beating myself up for hesitating to open a buy forex signal in EUR/CHF when this pair got close to the 1.10 level yesterday. Now, this pair is about 50 pips higher.

Trump Is Up Early And Furious

Donald Trump is always going to be a headache for forex traders; we never know when he´s going to pop up and screw the markets around, but we know he´s an early bird, so early (US) morning is when we should expect some of his bombshells.

He started the day today tweeting about Attorney General Jeff Sessions. Trump is complaining about Hillary Clinton´s email investigation and he´s saying that the guy who´s directing the investigator´s (Andrew McCabe) wife has received about $700k from Hillary, or as he calls her “H”.

Hillary Clinton is history now, so all this looks like a desperate attempt to divert attention from his implications with the Russians. The forex market realized this and ignored his tweets.

As we mentioned above, the major forex pairs have been trading sideways this morning, which means that the Buck was trading sideways. In the last hour or so the market is making a move against the USD.

The big US companies such as General Motors, 3M, McDonalds, Caterpillar etc reported their revenues today and they all beat expectations, yet the USD is still falling.

GBP/USD finally moved considerably higher after being stuck around 1.30 for a few days, while EUR/USD is threatening 1.17, with the big level standing just a dozen pips above. We will have a look at this forex pair in the next forex update. We have a trade idea as well so hang around for a trade signal in EUR/USD.