Forex Signals U.S. Session Brief, Oct. 10 – The Dollar and Cryptocurrencies Are Suffering, but That Brings Trading Opportunities for Us - Forex News by FX Leaders

Forex Signals U.S. Session Brief, Oct. 10 – The Dollar and Cryptocurrencies Are Suffering, but That Brings Trading Opportunities for Us

The USD is having trouble today and I can’t see any reason for that. Cryptocurrencies have been having a rough time since yesterday as well and again, I can’t see why. In fact, it should be the opposite considering recent crypto developments. In the other hand, Bitcoin continues its march higher.

Finally Some Good Numbers from the UK

The UK manufacturing production and trade balance reports were released this morning. Manufacturing took a sudden turn higher last time after missing expectations for months, so there was interest to see if the turn was sustainable.

Well, expectations were at 0.2% while the actual number came out at 0.4%. The industrial production remained positive for the second month as well. The UK economy has been cooling off since the Brexit referendum last year, but in the last two months we have seen some light at the end of the tunnel.

The construction output also jumped higher today after many negative months, which means that this sector has been shrinking. SO, the positive reading today is yet another ray of hope.

I was expecting GBP/USD to climb to 1.3220-30 after the release where I was planning to open a sell forex signal, but GBP pairs were unfazed.

Has the Trend Reversed for the USD or Is It Still in Decline?

The USD has been in a downtrend the entire year, but in the last few weeks we have seen the USD buyers put up a fight. In fact, it seemed like the downtrend was over since the Buck had gained several cents against most major currencies.

But in the last couple of days, we are seeing another push down for the Buck. GBP/USD is nearly 200 pips higher now while EUR/USD stopped right at support a few days earlier. It is climbing higher today.

Although, I don’t think the uptrend in this forex pair will resume fully, because there is a top between 1.20 and 1.21, which I don’t think will be broken.

I’m actually looking at a certain level for a sell forex signal, which I will explain in detail in the trades section below.

After trading in a range for a few weeks, Cryptocurrencies started climbing higher last week. Although, the beginning of this week doesn’t look too promising, apart from Bitcoin. Most of the crypto market dived yesterday, losing nearly 10% of its value.

However, the decline seems to have stopped right now. Ripple Coin and Ethereum are slowly crawling higher today, which means that this wave of selling might be over. Anyway, below you will find a trade idea for these financial instruments. 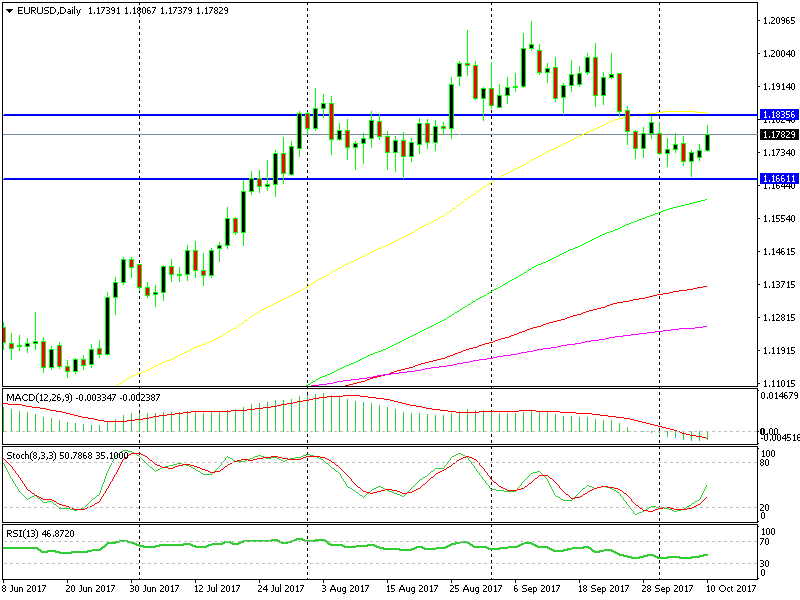 We already have a long-term sell signal in this forex pair, but the charts are building up for another sell position. The monthly chart shows two morning star candlesticks, which are bearish signals after an uptrend. Also, as you can see from the daily chart above, the 50 SMA is standing at 1,1820-30 which is a previous support and resistance level. So, I’m thinking of adding another short position to our existing sell signal here if the price gets up there.

Well, I actually pointed out all the reasons to go long on cryptos. Although, I would stick to Ethereum and Ripple because these two have been showing resilience lately.

So we saw another tumble in cryptocurrencies yesterday, but as the case is with this “money,” dips are seen as buying opportunities. We’re looking to buy one or two of them, so hang around guys for another cryptocurrency signal.