USD/JPY Having Second Thoughts at the 50 SMA

USD/JPY has been on a steep downtrend for over a week. Yesterday, however, the pair made a turnaround following the hawkish comments from FED members, climbing more than 100 pips in just a few hours. 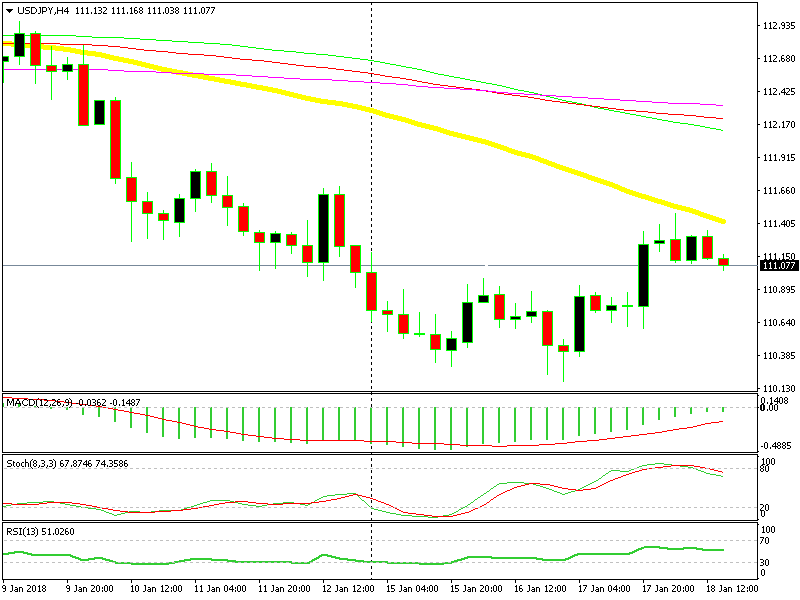 Buyers found an obstacle on the way, with the 50 SMA (yellow) standing at the 111.45-50 level, which has been the top for this pair so far. Last night, buyers and sellers met below that moving average, and since then, the price stalled.

Now it seems like this pair is starting to make a reversal. The 50 SMA is surely providing resistance and scaring off the buyers, while encouraging the sellers.

The stochastic indicator is overbought, which tells us that the retrace up has concluded, and that the pair will resume its downtrend. We may open a short term sell forex signal up here, with a stop above the 50 SMA at approximately the 11.60 region.

We say short term, as the level at 110 held its ground. the daily candlestick on Tuesday closed as a doji, followed by a big, bullish candle yesterday. Being that this is a reversing pattern forming just above 110, it looks as though the long term is bullish. We can, however, try the downside one more time before this pair makes its proper reversal higher.