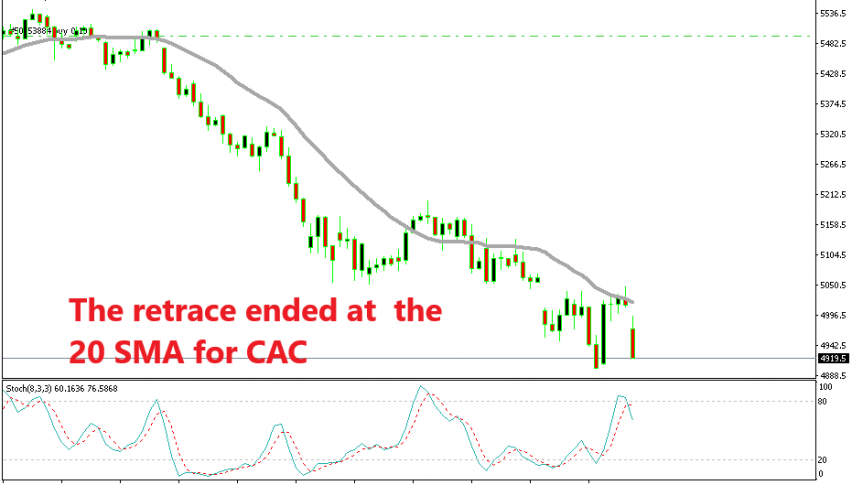 Stocks started the day on the wrong side today

Yesterday, we opened two signals in DAX and CAC. We opened these two trades as they were retracing higher. In DAX, we didn’t want to lose the opportunity and got a little impatient. So we sold this index when it was at the 20 SMA on the H1 chart.

But, the market sentiment improved somewhat in the afternoon, so we waited a bit longer in CAC, until it retraced properly on the H4 chart. The stochastic indicator became overbought on the H4 chart and the 20 SMA (grey) caught up with the price, providing resistance.

We left these two signals in red last night as European stock markets closed, but I had this feeling that we would wake up to find a surprise this morning and so we did. Last night, the last H4 candlesticks closed as dojis and upside-down hammers, which are reversing signals, so the chart formations looked poised for a bearish turnaround today.

This morning, the sentiment has turned negative once again which we can observe from safe haven assets. Gold as it jumps around $10 higher, while USD/JPY is sliding lower. Risk assets, are declining as they usually do when the sentiment deteriorates.

They opened with a gap lower and they are still sliding lower. In DAX, we closed the signal manually for a profit of around 100 pips while in CAC the signal hit the take profit target. So, we started the day on the right foot, and now let’s scan the markets for other trade opportunities.