US Session Forex Brief, March 15 – Stock Markets and Gold the Only Games in Town Today - Forex News by FX Leaders

US Session Forex Brief, March 15 – Stock Markets and Gold the Only Games in Town Today

Traders Are Going Long U.S. Stocks Despite Downturn In NFP.

During the Asian session today the commodity Dollars and the JPY attracted some decent bids, as the Bank of Japan reinforced the idea that they will keep interest rates low/negative for quite some time. BOJ governor Kuroda doesn’t see further global economic slowdown and he sounded optimistic that the Chinese fiscal stimulus package will affect the economy positively since it is pretty big. That seems to have improved the sentiment in financial markets as NZD/USD and AUD/USD rallied higher, but at the same time USD/JPY lost around 40 pips.

The momentum carried on with stock markets making a strong bullish move  in the European session. Most of the major indices broke above this month’s highs today, which means that the pullback is over for stock markets. Now, they have resumed the uptrend that started early this year, so no major trend reversal. At the same time, GOLD, which is a safe haven asset, has also moved higher. Meanwhile, the Brexit headache continues but it might come to an end next Tuesday which seems like the date for the third Brexit vote for Theresa May. But, we have said so before and it keeps being postponed, so who knows? 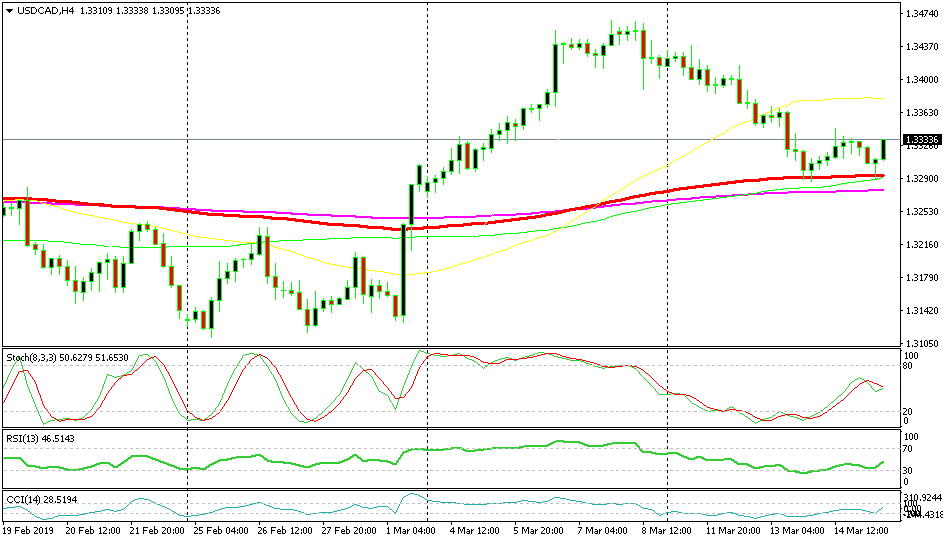 USD/CAD entered a bullish trend two weeks ago after trading in a range for several weeks. Although this week we saw a retrace down, the trend is still up since the pullback ended this morning way above previous lows. The price found support at the 100 SMA (red) this morning and formed a pin candlestick above it which is a reversing signal. The following candlestick looks quite bullish so the reverse is already underway.

The economic data from the US today was disappointing. The Empire State manufacturing index fell to the lows of last year, the industrial production missed expectations growing by a mere 0.1% while manufacturing production declined once again. The USD lost around 30 pips after these reports, so let’s see if it will close the week on a bearish footing.