The expected correction of Bitcoin and the cryptocurrency market finally started last week, after Bitcoin went for a re-test of the previous golden ratio resistance at around $13.000. Currently, technical indicators seem to point towards a continuation of the downtrend. Let’s find out where the market is heading next! 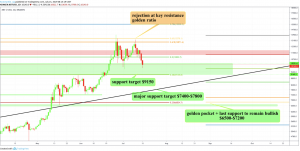 Bitcoin reached down to its next support area between $9,135 and $10,300 and will most likely bounce off the 0.382 fib level at $9.150. If this level fails to hold, Bitcoin might continue its downtrend towards the yearly trendline at around $7,500, where Bitcoin will most likely bounce off again. If this level also breaks, Bitcoin must hold above the support zone between $6,500 and $7,200 to maintain the bullish trend.

For now, it seems likely that Bitcoin retraces down to the trendline between $7,400 and $7,800. If Bitcoin attempts another rally towards the upside, it finds the next resistance at around $11,500. However, the support zone between $9,135 and $10,300 will most likely turn into a resistance. 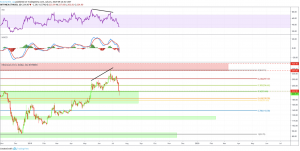 As previously assumed the bearish divergence in the RSI resulted in a heavy downward movement which made Ethereum lose 44 percent in value. For now, Ethereum is in strong support zone and the RSI is nearing oversold regions, which indicate an upward movement in the not-too-distant future. The golden ratio at $180 could be an interesting retracement target, where Ethereum will most likely bounce off towards the upside. If the support zone between $165 and $220 fails to hold, Ethereum finds its next support at around $120. 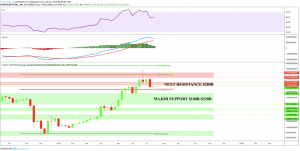 The cryptocurrency market faced harsh rejection by the resistance at $350b, as assumed in the previous analysis, and found short-term support at the 0.236 fib level. As the support at $280b failed to hold and turned into resistance, the market finds its next support between $180b and $220b.

Both the RSI and the MACD have plenty of room towards the downside and the histogram of the MACD is ticking lower while the MACD lines are about to cross bearishly. Thus, we can expect a continuation of the retracement. 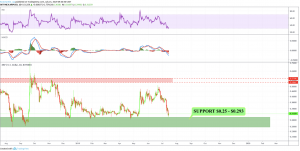 Ripple touched the support zone at between $0.25 and $0.293. With the RSI touching oversold regions and the MACD reaching very low regions while the histogram is ticking higher, we can soon expect a decent price correction towards the upside. Ripple might reach as high as $0.36 after reaching the support zone.

The biggest gainers of the week were
INT, which rose by 38 percent,
ADX, which gained by 30 percent and
UUU, which surged by 25 percent.

Interesting news of this week was a Donald Trump tweet where he stated: “I am not a fan of Bitcoin and other Cryptocurrencies, which are not money, and whose value is highly volatile and based on thin air. Unregulated Crypto Assets can facilitate unlawful behavior, including drug trade and other illegal activity….” on July 12, 2019. This caused a stir among many crypto enthusiasts.