The main event for this week is the FED meting which will take place tomorrow in the evening. They are widely expected to cut interest rates by 25 bps, but traders are uncertain whether the FED will deliver just one rate cut tomorrow and end it there, of if they will enter an easing cycle. Hence the uncertainty in the forex market this week. Besides the FED, the Bank of England (BOE) will also hold its meeting on Thursday, although the central bank bonanza started with the Bank of Japan (BOJ) meeting today in the Asian session.

The BOJ left rates unchanged at 0.10%, but forecasts were pretty gloomy. Governor Kuroda sounded quite pessimistic on inflation, growth and the future of the global economy. He also mentioned more easing if things get worse.

In France, consumer spending turned negative again in June while Q2 GDP missed expectations, coming at a mere 0.2%. The consumer confidence remained in negative territory in the Eurozone, which points to an uncertain future for the Eurozone economy. Bayer and Lufthansa reported weak forecasts too, so everything looks bleak today. As a result, the sentiment has turned negative again in financial markets, with stock markets sliding lower together with commodity currencies, while safe havens such as the JPY are attracting some decent bids. 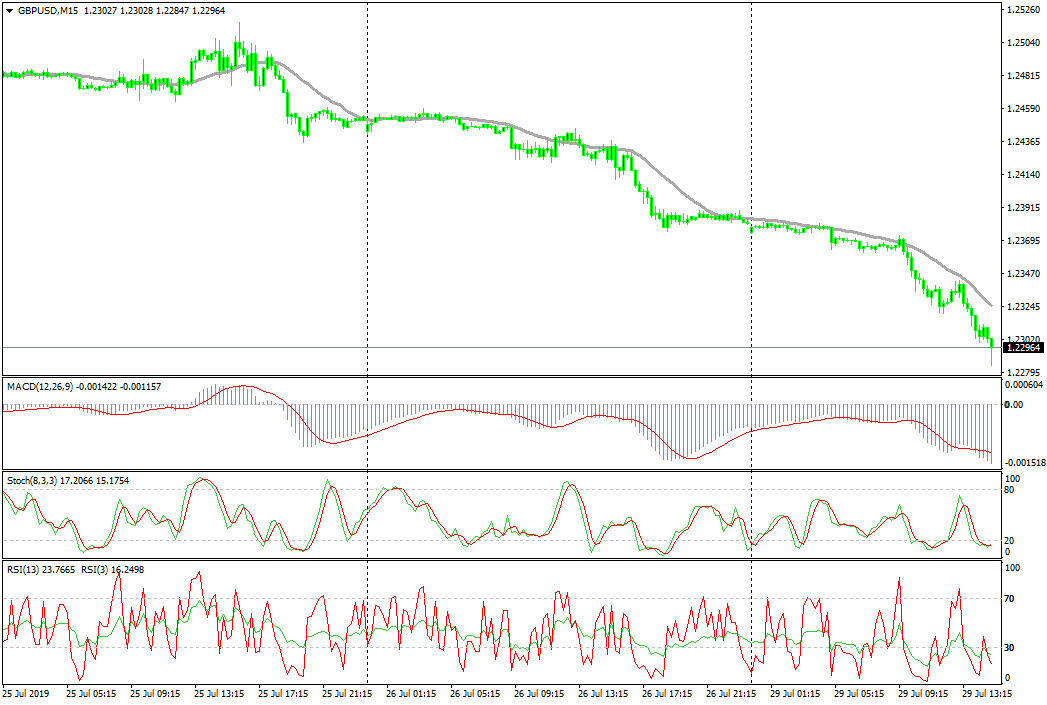 The 20 SMA is providing resistance for GBP/USD

GBP/USD has turned extremely dovish now that the EU is not changing its position regarding Brexit and the Irish backstop, after the new Prime Minister has been appointed. Last week the bearish trend picked up pace and today this pair has lost nearly 200 pips already. The 20 SMA is pushing the price down on the 15 minute chart, which means that the trend is really strong even on this time-frame chart.

There are no events scheduled for the US session today, so we closed this forex brief a bit short. The USD has resumed the uptrend of the last two weeks again and is grinding higher against major currencies. Although, I don’t expect much action today due to the fundamental events that are scheduled for the week ahead.