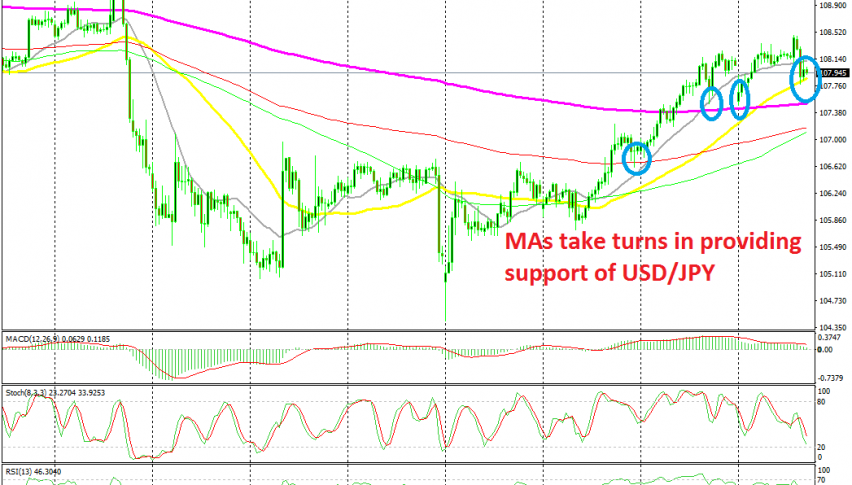 USD/JPY has been on a bullish trend this month as the market sentiment improved. During this time, moving averages have done a good job in pushing the price higher and keeping the trend going. They have also held the decline during the pullbacks lower.

The 20 SMA (grey) was the one to do that job in the last two weeks, but at the beginning of this week when this pair opened with a gap lower following the attack on Saudi Arabia, the 200 SMA (purple) took that job and held the decline. The price moved higher and closed the gap eventually.

Although, last night USD/JPY reversed lower after the Bank of Japan (BOJ) meeting. This pair has retraced around 70 pips down so far, but the 50 SMA (yellow) is holding on as support. So, it seems now that the 50 SMA has taken up the job to push the trend higher. But, the 20 SMA seems to have turned into resistance now on this chart. USD/JPY tried to turn bullish this morning after bouncing off the 50 SMA, but the climb stopped right at the 20 SMA.

Now this pair is trading between these two moving averages. The retrace lower is almost complete on this time-frame, which seems like a good chance to buy, but the buyers have to push above the 20 SMA first, in order for the uptrend to resume. If USD/JPY climbs above the 20 SMA, then we might go long too.

Bitcoin Getting Ready for the Next Bullish Leg, as MAs Keep Holding as Support
9 hours ago