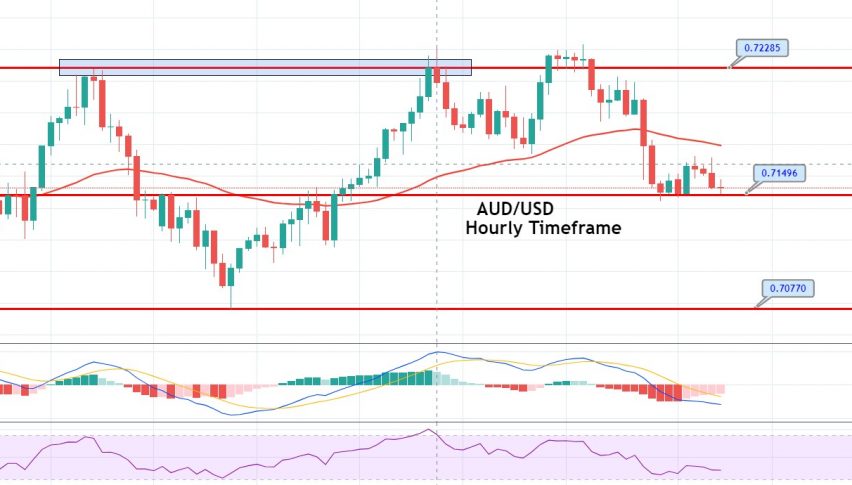 The AUD/USD pair closed at 0.71582, after placing a high of 0.72430 and a low of 0.71442. Overall, the movement of the AUD/USD pair remained bearish throughout the day. According to the Assistant Governor of the RBA, Luci Ellis, Australia’s economic recovery is likely to be slower than was hoped, and unemployment figures will remain high for several years, even though the contraction driven by the COVID-19 pandemic has been smaller than expected.

She added that the rise in the number of coronavirus cases in Australia’s second-most populous state, Victoria, since June, had worsened the country’s border economic outlook. Ellis said that even though the initial contraction was smaller, the recovery is likely to be more protracted, and it is going to take longer to reduce unemployment again.

The RBA continues to rely on a vaccine or a medical breakthrough, in order to achieve its upside scenario, as that would result in the national economy bouncing back harder than first predicted. On the data front, The AIG Services Index for July increased to 44.0 from the previous 31.5, lending support to the Australian dollar.

On the US front, the Average Hourly Earnings for June rose to 0.2%, compared to the expected -0.5%. The Non-Farm Employment Change for the US rose to 1,763K from the projected 1,530k, and this supported the US dollar. The Unemployment Rate from the US also dropped to 10.2% compared to the expected 10.5%, boosting the greenback. The strong dollar weighed heavily on the AUD/USD, causing the pair to drop below the 0.7200 level.

President Trump also banned American companies from dealing with the TikTok and WeChat apps. This might add fuel to the ongoing tussle between the US and China, and it could have repercussions on the US-China phase-one trade deal. These fears weighed on the risk-on market sentiment, keeping the Aussie, which is perceived as risky, under pressure on Friday.

The AUD/USD is trading above a support level of 0.7145, which is extended by a double bottom on the hourly timeframe. The AUD/USD pair forms an ascending triangle pattern that supports the Aussie at around 0.7190, with a double top resistance level of 0.7240. A bearish bias seems dominant today, as the RSI and 50 EMA support downward momentum in the Aussie/USD pair. On the higher side, violation of 0.7230 could lead AUD/USD prices towards 0.7280 and even higher. At the same time, support will be found at around 0.7150 and 7077. Good luck!