Litecoin Forms A Triangle, But We’re Holding on to Our Buy Signal, As the Pressure Remains to the Upside - Forex News by FX Leaders 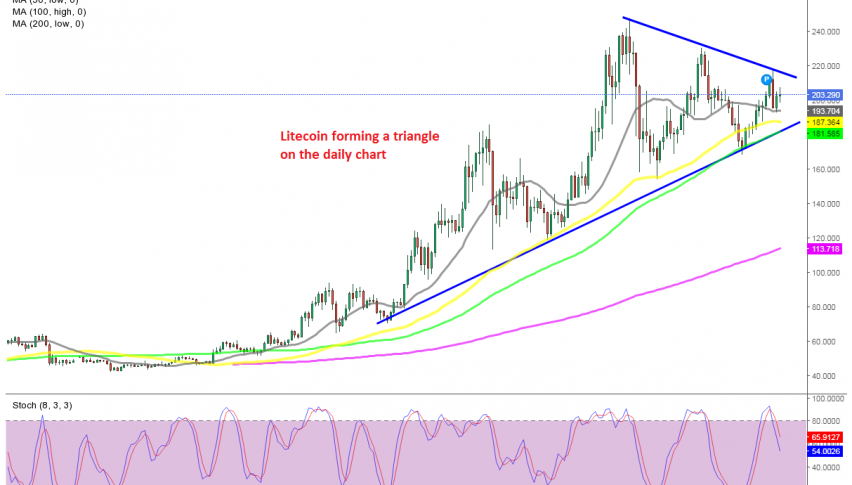 Litecoin Forms A Triangle, But We’re Holding on to Our Buy Signal, As the Pressure Remains to the Upside

The retreat ended at the 20 SMA on Saturday

Cryptocurrencies had such a massive rally in the last months of 2020, which continued during the first two months of 2021.  Although we saw a major correction at the end of February, it wasn’t too different from other retraces lower that we have seen, such as the one we saw in the beginning of January.

Although, this time Litecoin didn’t make new highs, while other major cryptos such as BITCOIN and ETHEREUM have continued to make new highs. Litecoin bounced off the 50 SMA (yellow) on the daily chart, as we covered in our Litecoin price prediction for 2021 but retreated again before breaking the previous record highs, which stand at $247. The latest major retreat ended at the 100 daily SMA (green) and we saw yet another bounce.

But, the bullish momentum ended even lower this time. So, the highs have been getting lower since February, while the lows have been getting higher, which means that a triangle is forming. At the bottom we have the moving averages also working as support for LITECOIN .

We have a long term buy forex signal in Litecoin which we opened in February during the strong retreat and we will be holding that trade open, since the pressure still remains to the upside for cryptos, as indicated by the continued new highs in major altcoins and the fact that the 20 SMA (gray) turned into support yesterday. But, buyers will have to push above the top line of the triangle first, so let’s be patient.

Ethereum Price Rejected Again: Is Another Bearish Move Coming Up?
7 hours ago