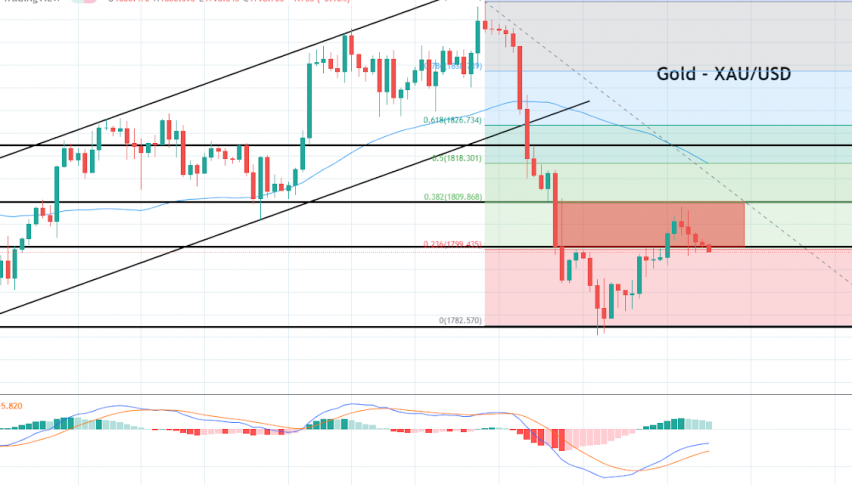 Gold Faces Hurdle at 38.2% Fib – Why XAU Could Resume Downtrend

Gold prices closed at $1802.05 after hitting a high of $1808.55 and a low of $1797.00. GOLD continued its bullish momentum for the second consecutive day on Tuesday due to decreasing prices of the US dollar. Another factor contributing to the rise in the value of gold was the escalation of tensions over Ukraine.

The greenback was weak across the board as it slipped for the second consecutive session and reached its lowest since 96.24. The retreat in the dollar was driven by the more dovish tone adopted by the US Federal Reserve. The policymakers of the US central bank said on Monday that they would raise interest rates in March, but they adopted a cautious tone about what might follow after that. Instead, they signaled a desire to keep options open in the face of an uncertain outlook for inflation and the ongoing pandemic.

Federal Reserve policymakers believed that the support for the economy should be lifted as economic growth was at a moderate level and inflation was at its highest in four decades. Policymakers said that after a rate increase in March, the next decisions would depend upon the data releases and the pandemic situation. The cautious tone from the Fed added weight on the US dollar, which ultimately supported the rising prices of the precious metal on Tuesday.

On the other hand, rising tensions between Russia and Ukraine boosted safe-haven demand for gold on Tuesday, after Ukraine announced plans to beef up its armed forces as European leaders backed the country in its standoff with Russia. The heightened tensions over Ukraine prompted UK PM Boris Johnson to double the number of troops deployed in Eastern Europe.

On Wednesday, the ADP Non-Farm Employment Change numbers will be closely watched by investors to find more clues about the future momentum of the US dollar and precious metals.

Gold completes a 38.2% Fibonacci retracement at the $1,808 level before showing a bearish reversal. At the moment, gold is trading at the $1,798 level and it’s heading south towards an immediate support level of $1,790. Under this, gold’s next support level is at the 1,782 level, which is being extended by a double bottom level.

On the higher side, XAU/USD may find resistance at the 1,809 level. Continuation of the uptrend can drive further upward movement until the 1,818 or 1,826 level that’s being extended by 50% or 61.8% Fib levels. Since the RSI is holding under 50, the chances of a selling trend remain strong. So, let’s consider staying bearish below 1,800 and vice versa. Good luck!